An Post warns of major revenue decline due to coronavirus 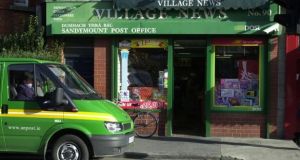 An Post has forecast a decline in mail volumes, which it said would be partially offset by parcels growth

An Post has recorded a rise in revenue and profit for the third year in succession, but warned of a decline in turnover this year due to Covid-19.

The company recorded a 147 per cent rise in pre-tax profits in 2019 from €26.8 million to €66.3 million. However, that is accounted for entirely by the €40 million profit on the €100 million sale of the One4all GVS business to Blackhawk Network in late 2018. An Post owned 53 per cent of the company, and sold its vouchers through post offices around the Republic.

Like-for-like revenues rose 2 per cent over the year to €888 million, while operating profit came in 40 per cent higher at €39 million.

An Post said it expected a material decline in revenues during 2020 because of the impact of Covid-19, but did not speculate on the scale of the expected shortfall.

The group forecast a decline in mail volumes, which it said would be partially offset by parcels growth.

In 2016 advisers forecast that An Post would lose €110 million in 2019 without widespread changes. Chief executive David McRedmond said the latest results showed good progress in the company’s transformation strategy, which has seen a number of post offices closing and a focus on digital services and new products.

“In 2019 we accelerated the transformation of An Post. The focus on e-commerce saw parcel volumes up 30 per cent over the prior year, and the post office network is replacing traditional revenues with new products and financial services. Operating costs are shifting into the new areas of growth, and the business is strongly cash positive,” said Mr McRedmond.

By year-end An Post had positive cash on its balance sheet of €143 million, it said.

During 2019 it agreed a loan facility of €40 million with the European Investment Bank, of which €10 million had been drawn down by year-end. Group cash totalled €143 million at the end of 2019, as against €115 million a year earlier.

An Post said the deficit on its pension fund fell to €28 million last year from €48 million at the end of 2018.

1 Direct sea routes to Europe offer certainty in choppy Brexit waters
2 ‘I don’t need to do any of this. . .I don’t actually need to work.’
3 There was no vaccine for Anglo: Why the last crisis was different
4 Pandemic brings a halt to Zara-owner’s Irish expansion
5 Admission of mistake in Oxford vaccine dose raises doubts over reliability
6 Fiona Reddan: Who’s afraid of Revolut? Not AIB and BOI it seems
7 ‘Make plans but don’t hold on to them too seriously’
8 Online shoppers face unwelcome tax surprise
9 Pavlok: zapping bad habits with 450 volts
10 State may face €1bn in compensation in Covid-19 case, Press Up claims
Real news has value SUBSCRIBE