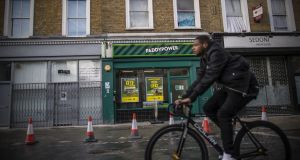 Paddy Power Betfair already has a substantial business in the US, where it operates horse racing TV channel and online betting network TVG. Betting on racing is legal in the US. Photograph: Carl Court/Getty Images

Some US states may legalise sports betting by autumn, opening potential new markets for businesses such as Paddy Power Betfair, the Irish group’s chief executive, Peter Jackson, predicted on Friday.

The US supreme court this week struck down a federal law banning individual states – outside Nevada and a handful of others – from legalising betting on sports such as football and baseball games.

The move is likely to benefit the Irish gambling giant and its rivals. Market analysts believe their expertise will be an advantage when it comes to bidding for licences in states that decide to legalise.

Speaking after Paddy Power Betfair’s annual general meeting, Mr Jackson said that some states, including New Jersey where the group already has a business, could license sports betting by the autumn.

“I think the reality is that New Jersey will be live in a few months time, their hope is that there will be businesses on the ground taking bets in advance of the NFL season, which starts in September,” he said.

Mr Jackson added that others, such as West Virginia and Missouri, had legislation ready to go, while New York was also weighing the possibility of allowing sports betting.

He estimated the states likely to legalise sports betting could account for around one-third of the US population, implying a market of more than 100 million.

Mr Jackson predicted that new US markets were more likely to graduate straight to smartphones and other such devices rather than relying on large bookie shop chains.

Paddy Power Betfair already has a substantial business in the US, where it operates horse racing TV channel and online betting network TVG, and an online casino and betting exchange in New Jersey. Betting on racing is legal in the US.

According to Mr Jackson, the company has around 10 per cent of the US horseracing market. Its businesses there had revenues of $140 million last year, the group’s results show.

Paddy Power Betfair is also in talks with fantasy US sports business Fanduel about a possible merger with Draft, the startup that the Irish company bought last year. Mr Jackson said he could not comment on those discussions.

Also this week, the British government announced that it was slashing the maximum bet allowed in gambling machines in betting shops to £2 from £100. Paddy Power estimated that this would have cost it €52 million in 2017.

However, Mr Jackson welcomed the move and pointed out that it had ended uncertainty over the issue, which dragged on as the UK authorities reviewed rules governing the machines.

The Irish group believes that savings on machine duty and revenue shares with suppliers will offset some of the revenue fall, while it may also lead to further consolidation in the industry.

Mr Jackson pointed out that Paddy Power Betfair ran “bookmakers rather than high street casinos” and indicated that would continue to be the focus of its retail business.

In the Republic, he suggested that any increase in the current 1 per cent tax on betting turnover could hit smaller bookmakers hardest. The charge is ultimately used to support the horse and greyhound racing industries. Racing and breeding interests have asked the Government to double the tax.