European markets end the week on another spurt of growth 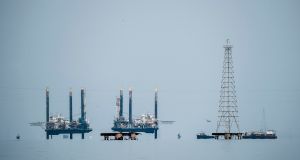 European markets dipped on Friday, but still managed to post their eighth straight week of growth.

Paddy Power Betfair continued its strong run on the back of news this week that the US supreme court has lifted restrictions on sports betting.

The Irish gambling giant had its annual general meeting on Friday, after which its chief executive, Peter Jackson, indicated that some states could license operators in time for the beginning of the football season in autumn. Its shares climbed 1.8 per cent to €98. Its stock is worth 22.5 per cent more than last Friday’s closing price of €80.40.

Bank Permanent TSB added 0.59 per cent to €1.70. Traders suggested that investors read the news that Barclays bought Irish mortgages for €4.6 billion was positive for the home-lender’s business.

A strong dollar aided building materials specialist CRH, half of whose business is in the US. The index heavyweight gained 1.66 per cent to close at €31.86.

Independent News &Media, which also had its annual general meeting, advanced 1.06 per cent to 9.5 cent.

Paddy Power Betfair, whose main listing is in London, added 2.32 per cent to 8,600 pence sterling.

Commodities, a key part of the UK stock market, have driven much of the recent climb in the FTSE 100, which has also benefited from a string of brokers recommending investors buy back into the region.The index made a full recovery from its February losses.

On Friday, weak results from AstraZeneca sent the shares down nearly 2 per cent, weighing on the healthcare sector – a big drag on the overall index.

Yet the biggest faller in the commodity space was miner Glencore, down 4.4 per cent at the bottom of the FTSE following a report by Bloomberg that it may face an inquiry from Britain’s Serious Fraud Office into allegations of bribery linked to its operations in Democratic Republic of Congo.

Shares in battery maker Johnson Matthey fell 1.8 per cent after a note from UBS listing “three reasons to sell” the stock.

Fiat Chrysler Automobiles fell amid allegations in a US court that suppliers to the car-maker discussed illegal uses of software to pass emissions tests in 2010. Its shares ended the day 1.8 per cent down at €18.55 after dropping as much as 3.6 per cent on the Italian market on Friday.

After a turbulent start of the year, equities in Europe have been buoyed by a surge in crude oil prices to $80 which has prompted investors to add exposure to the energy sector. The oil and gas index is up more than 14 per cent year to date, comfortably leading sectoral gainers in Europe. On Friday shares in the sector were taking a breather, with oil majors Eni, Royal Dutch Shell and Total flat to down 0.5 per cent.

Italian banks took a hit on investor fears that a government accord with anti-establishment parties could loosen fiscal discipline. The sector index lost 3.1 per cent.

Richemont fell 5.2 per cent after the luxury goods group posted a net profit that fell short of expectations, partly due to buying back inventory, and said it could target strategic investments and divestments.

Wall Street edged lower, weighed down by bank and chip shares as well as a handful of tepid earnings reports.

Deere jumped 6.3 per cent after the tractor-maker raised its full-year earnings estimate.