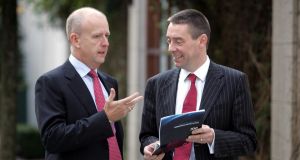 Irish distribution group DCC is likely to buy more businesses in the US and Europe this year following last year’s record £670 million (€762.5 million) spend on acquisitions.

DCC, which distributes and sells liquid petroleum gas (LPG), oil, healthcare products and technology, grew profit before tax in the 12 months to March 31st by 26.6 per cent to £316.4 million from £250 million.

Speaking after DCC published its results, chief executive Donal Murphy confirmed that the group hoped to further deals in the US and Europe this year to expand its existing businesses. “We always have targets in our sights,” he said.

Purchases Purchases last year included Illinois-based LPG distributor Retail West, the first move by this division into the US.

“We think that the US is a particularly interesting market because it’s very fragmented. There are 4,000 players,” Mr Murphy said. “We have a strong position in three states. We have a 0.6 per cent market share, so there’s a really big market out there for us to go after.”

The group will also look at further deals in Europe. In January, it bought Tega, a German LPG distributor and Countrywide LPG in Britain.

DCC’s healthcare division also got a foothold in the US through the purchase of contract manufacturer Elite One Source in Montana. Mr Murphy indicated that this arm could complete further transactions this year.

He described Hong Kong and Macau, where DCC bought an oil distributor from Shell, as more of a medium-term prospect.

DCC does not guide the market on what it thinks it will spend on acquisitions so Mr Murphy could not say if it would match last year’s record.

“If you had asked this time last year whether we would spend £670 million, I probably would not have seen it, but the opportunities came along,” he said.

Dividend Adjusted earnings per share on the group’s continuing activities rose 10.8 per cent to 317.5 pence.

DCC said it was proposing a 10 per cent hike in the final dividend, which would increase the total dividend for the 24th year in a row since the company first listed in 1994. The company is currently listed in the UK.

In a statement, Mr Murphy said that DCC’s acquisitions demonstrated its ability to buy and integrate businesses to strengthen positions in its existing markets.

Looking ahead, DCC said it expected a further year of growth.