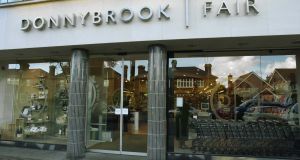 Donnybrook Fair: co-founder Joe Doyle will stay on to run the business for a while for Musgrave. Photograph: Frank Miller

The CCPC cleared the acquisition at the end of a preliminary “phase one” inquiry. The commission’s announcement reveals that Cork-based Musgrave is completing the transaction using its Superquinn subsidiary, which it acquired in 2011 when it bought the chain that it has since rebranded to SuperValu.

The Donnybrook Fair transaction includes four stores in Dublin – in Donnybrook, Stillorgan, Malahide and Baggot Street – and one in Greystones, Co Wicklow. It also includes Donnybrook Fair’s food production facility in west Dublin, which was of particular interest to Musgrave.

Donnybrook Fair’s co-founder, Joe Doyle, will stay on to run the business for a period for Musgrave. He and his wife, Mary, could receive up to €15 million for their shares, while Musgrave will also take on the chain’s €10 million debts.

1 Irish whiskey sales near milestone of 12m cases a year
2 Should my mam wait for house prices to drop before buying?
3 Hard-hit SMEs get ‘paltry’ €11m worth of loans under State scheme
4 McCanns’ Balmoral sees property value hit from Covid-19
5 ‘I’m so lucky to be in the Caribbean – a million miles from Derry Girls’
6 Pilita Clark: Why we’re about to learn if we are really in the A-team
7 Chris Johns: Past is another country when it comes to our post-pandemic future
8 ‘The recovery needs to be a full-scale economic renewal’
9 Tobacco makers still trying to make a mint from Irish menthol market
10 ‘I have a talent for justifying purchases’
Real news has value SUBSCRIBE