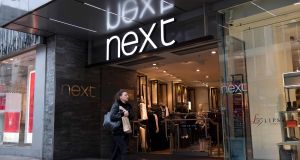 UK retailer Next said its full-price sales in the second quarter declined by 28 per cent, a much better result than it expected at the height of the Covid-19 pandemic, allowing it to forecast full-year profit of about £195 million (€214.6 million).

“Warehouse capacity has come back faster than we had planned, and store sales have been more robust than anticipated,” the fashion retailer said on Wednesday.

Online bounced as warehouse picking and dispatch capacity returned to normal levels, with sales up 9 per cent on the same period a year ago, it said, while like-for-like sales in its stores, the bulk of which re-opening in June, were down 72 per cent for the quarter to July 25th, and down 32 per cent since June 15th.

Childrenswear, home, nightwear and sportswear, along with some adult casual clothing, had done much better than the more formal parts of its adult clothing ranges associated with work, going out, overseas holidays and large social events, it said. – Reuters