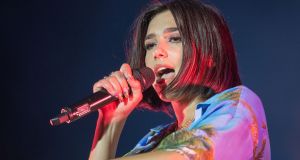 Pretax profits at the Irish arm of music giant, Warner Music, surged by 81 per cent last year to €990,956, as the US-owned Warner Music Ireland Ltd benefited from the growing popularity of music streaming.

Recently filed accounts for the company that counts Coldplay, Dua Lipa and Ed Sheeran among its international stars show revenues rising 7 per cent to €12.37 million in the 12 months to end-September last.

The company’s Irish artists include Glen Hansard and Picture This.

According to the directors’ report, the increase in revenues was “largely due to the growth of music streaming”. They believe the company “will continue to grow turnover” and state that Warner Music Ireland “is embracing the spectrum of opportunities presented by digital technology to deepen the connection between fans and artists”.

A breakdown of revenues shows that direct sales increased by 11 per cent to €11.34 million while income from royalties and licence fees fell 27 per cent from €1.4 million to €1.02 million.

Numbers employed by the company increased from 10 to 11 but staff costs were marginally lower at €949,937.

At the end of September last, the company had accumulated profits of €3.09 million.