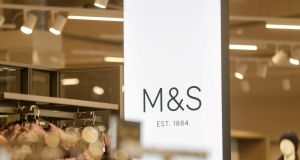 Britain’s Marks & Spencer on Wednesday reported a 17 per cent drop in first-half profit, dragged down by falling clothing sales, illustrating the bumpy path of its latest attempt at a turnaround after over a decade of false dawns. Shares in the 135-year-old M&S, one of the best known names in British retail, have fallen 36 per cent over the last year and in September the group lost its place in the prestigious FTSE 100 index.

The group forecast some improvement in trading in its second half but cautioned that market conditions remained challenging. Despite the profit fall chief executive Steve Rowe was upbeat. “Our transformation plan is now running at a pace and scale not seen before at Marks & Spencer,” he said. “For the first time we are beginning to see the potential from the far reaching changes we are making.

“In clothing and home we are making up for lost time. We are still in the early stages, but we are clear on the issues we need to fix.” M&S made a pretax profit before one-off items of £176.5 million in the six months to Sept. 28. That was in line with analysts’ average forecast but down from 213.0 million pounds made in the same period last year. First-half clothing and home like-for-like sales fell 5.5 per cent, impacted by availability and supply chain issues. Food sales increased 0.9 per cent on the same basis, driven by volume as prices were cut. The group said it had seen an improved sales performance in October in clothing and home.

In July Rowe sacked Jill McDonald, the head of its clothing division, days after he publicly criticised chronic availability, and assumed direct leadership of the division himself. The departure of supply chain director Gordon Mowat followed and in September M&S said finance chief Humphrey Singer was also leaving after little more than a year in the role. - Reuters