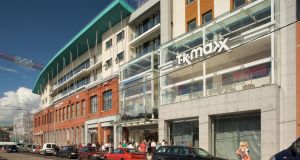 TK Maxx in Cork’s Cornmarket Centre. The chain’s US-based parent business, TJX Companies, has seen its shares continue to rise since the start of this year

TK Maxx has bucked the downbeat trend among high street retailers to post higher sales and profits on the back of a raft of new openings.

The retailer was buoyed by 21 store openings over the past year, including the continued expansion of its Homesense furnishings business, according to recently filed accounts.

Sales growth was particularly driven by the store openings, which involved the launch of eight new TK Maxx stores and 13 under the Homesense branding. The expansion took the company’s overall portfolio to 411 stores across the UK, consisting of 345 TK Maxx outlets and 66 Homesense sites.

US-based parent business TJX Companies has seen its shares continue to rise since the start of 2019, buoyed by strong growth in online sales for its British and US arms.

TK Maxx also cautioned that a hard Brexit scenario could “significantly impact” its operations, particularly in the short term. – PA