London Briefing: Being bumped off prestigious index does matter, whatever Norman says 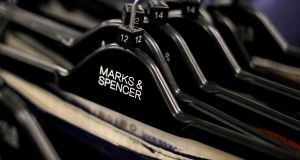 According to the Marks & Spencer chairman, Archie Norman, a place in the flagship FTSE 100 index is no big deal. But then, as M&S is being booted out of the blue chip index, he would say that, wouldn’t he?

Once Britain’s leading retailer, M&S has been on the brink of relegation from the prestigious share index for a year now. At the last reshuffle, in June, it escaped by the skin of its teeth and only because its stock market value was boosted at the last minute by the proceeds of a £600 million (€661.6 million) cash call on shareholders, money that will be used to fund its online link-up with grocery delivery group Ocado.

At the time, the M&S chairman shrugged off the 135-year-old retailer’s pending demotion. “When I went to ITV we dropped out of the FTSE 100, the sky didn’t fall in,” Norman said. “The business was the same business the day after.”

And, of course, he does have a point: M&S will still be racking up sales of more than £10 billion (€11 billion) a year and its 80,000 employees will continue about their work as usual, whether the group is a constituent of the FTSE 100, the FTSE 250, or any other index.

But its departure from the ranks of Britain’s largest 100 listed companies does matter, however brave a face Norman might put on it.

Founded in 1884, M&S has been a publicly quoted company since 1926. It has been a constituent of the FTSE 100 since the index was created 35 years ago and, before that, had a place in the FT 30 index.

There is real status for a company to have its shares included in the top tier index, attracting both domestic and international investors. And there are practical advantages too. FTSE 100 members benefit from the attentions of tracker funds, which will now be unable to include M&S in their portfolios.

September’s quarterly reshuffle was based on Tuesday night’s closing prices. At £3.6 billion, the group, one of only 28 original FTSE 100 constituents, was too small to retain its place among Britain’s largest listed companies. Thus the retailer will formally begin its life on the second tier index in a few weeks’ time.

The humbling of M&S has been a gradual, but relentless process. In 1997, it became the first retailer in the UK to make profits of £1 billion but in the years that followed it suffered endless boardroom upheavals, numerous chief executive changes and a near constant redrawing of its uninspiring clothing offer. Last year its profits came in at less than £85 million after yet another raft of “one-off” reorganisation costs.

In past decades M&S’s ambitions were global. In 1988, along with a growing European business, the group splashed out $750 million (€683.5 million) in cash to buy Brooks Brothers, the New York-based preppy menswear retailer.

It was all part of a grand plan to conquer the notoriously tricky US retail market, but, in 2001 and beset by problems in its core home business, M&S finally abandoned its American dream, selling Brooks for just a third of the original price.

While younger competitors such as Next have managed to withstand competition from the likes of Primark and Zara relatively well, M&S has suffered near constant sales declines. One five-year plan after another has been wheeled out by successive management teams, but to little apparent effect.

Loss of its FTSE 100 place marks the end of an era for M&S but perhaps life as a mid-cap company might suit the group better. Although the glory days have gone, it is still a substantial retailer and retains a special place in the heart of the British shopper.

M&S is in the process of closing 120 stores, which should bring its floor space more in line with demand. And it has high hopes for its joint venture on grocery delivery with Ocado, although City analysts say Ocado got the better of the deal.

If the M&S team, guided by its experienced chairman, does finally manage a turnaround – and analysts say the ruthless Norman is the best chance it’s had in years – then it’s entirely possible M&S could claw its way back. But recovery, if it comes, still looks a long way off.