Retailer had objected to plans to revamp shopping centre in Blackrock 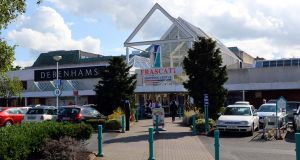 A €2.5 million row between Marks & Spencer and its landlord at the Frascati shopping centre in Blackrock, Co Dublin, which had threatened the centre’s planned revamp, has been settled.

Earlier this month, M&S sought a High Court injunction preventing a major extension to the Frascati centre, which was bought by a fund linked to Invesco for €68 million in 2015.

M&S pays an annual rent of €650,000 for its unit, the second largest in the centre. It claimed the design of the extension would materially affect access to its store, and it wanted a new entrance built that would maintain its “visibility”.

It was estimated that the works would cost €2.5 million, costs that it wanted the Invesco fund, IMRF II Frascati Ltd Partnership, to bear. Alternatively, it wanted its lease voided at M&S’s request.

Ken Scully, M&S Ireland’s finance director, accused its Frascati landlord of failing to engage with its concerns “in any meaningful way”, so it resorted to High Court action.

The matter has now been resolved, both sides told The Irish Times. They issued a joint statement suggesting that M&S will remain at Frascati,

“[M&S] and IMRF II Frascati Ltd Partnership are pleased to confirm that they have reached an amicable agreement in respect of M&S’s long-term occupation at Frascati Shopping Centre,” the statement said.

“Both parties are looking forward to working together to deliver a new and improved retail experience at Frascati.”

The planned project will more than double retail space at the complex, which is anchored by Debenhams. It was formerly owned by the Roche family that founded Roches Stores.