Ryanair recruiting pilots despite plan to cut up to 900 jobs, union says 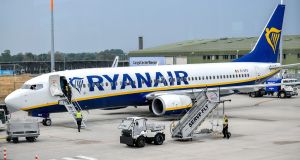 Ryanair is continuing to recruit pilots despite announcing plans to cut up to 900 jobs, one trade union says.

The Irish airline’s chief executive, Michael O’Leary, told staff this week that Ryanair had 500 more pilots and 400 more cabin crew than it needed, and that job losses were “unavoidable”.

However, Brian Hutton, general secretary of the British Airline Pilots’ Association (Balpa) said the carrier had been recruiting and was continuing do so.

“If Ryanair are so oversubscribed with pilots, it’s confusing as to why they have recently recruited and continue to do so,” he said. “What further adds to the confusion is the news of 900 job losses.”

Mr Hutton argued that Ryanair should negotiate with its pilots rather than spread uncertainty.

Balpa members in Ryanair are voting on a ballot for industrial action in a dispute with the airline over pay. The result is due in coming days.

Ads posted by multinational aviation and defence training specialist CAE appear to continue inviting applications from potential cadets to train as pilots for Ryanair, which is one of the group’s clients.

A social media post from Ryanair’s recruitment division in the middle of last month, when it emerged that the company had told staff that it had too many pilots, stated that cadet recruitment would continue. Ryanair did not comment yesterday.

It also emerged that 30 jobs are at risk in Laudamotion, the Irish group’s Austrian subsidiary.

Andreas Gruber, Laudamotion’s chief executive, warned that the jobs would go if the airline could not agree a deal on savings and flight rosters with unions in coming weeks.

Mr Gruber said he expected the airline to lose €50 million this year, down from €140 million in 2018, which he pointed was funded entirely by loans from Ryanair.

The losses are down to high fuel costs, very low fares, significant pay rises and inefficiency of crews, according to Mr Gruber.

“This level of financial loss is not sustainable and Laudamotion is not operating as effectively as it needs to,” his letter stated.

Mr Gruber warned that the high costs and inefficiencies threatened Laudamotion’s plans to expand its Vienna base and add four craft there.

“If we do not make the necessary changes to our business model and operations, the planned growth will be taken up by Ryanair, who will establish a base and move four Boeing aircraft into Vienna, where they can be deployed more efficiently and at a lower cost, than the Lauda fleet,” he said.

“We will be giving our people as much notice as possible of any cuts and we are sorry that we have to take this step, but it is imperative for the future survival of the business,” Mr Gruber wrote in the letter.

He also pointed out that had Ryanair not taken over Laudamotion last year, it would have gone into liquidation with the loss of all jobs.

“We, over the next couple of weeks will be doing our very best to minimise job losses, but some are unavoidable at this time,” he said.

Ryanair posted the video as it reported that profits for the three months to June 30th fell 21 per cent to €243 million.

Delays in the delivery of the Max aircraft, grounded for safety reasons, mean Ryanair will receive 30 “at best” of the 58 it expected to get on time for next summer. This has hit expansion plans.

Mr O’Leary also pointed out to staff that Ryanair had the lowest costs of any European airline and would weather the current storm. – Additional reporting: Bloomberg