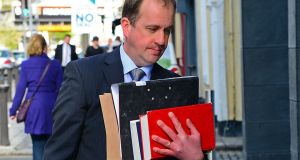 Alan Hynes: does not have a practising certificate, which would allow him to offer accounting services to the public. Nor can he carry out audits. Photograph: Eric Luke

Chartered Accountants Ireland has restored membership to Alan Hynes, whom it excluded after complaints from investors who lost €18 million in property ventures he controlled led to disciplinary proceedings.

A Chartered Accountants’ Regulatory Board (CARB) disciplinary tribunal excluded Mr Hynes in 2015 after finding he breached codes of ethics and principles meant to guide the profession in integrity, competence and truthfulness.

Mr Hynes’s appeal against his exclusion failed, but he sought a judicial review of that decision in the High Court, which found in his favour in March and ordered that he be restored to membership pending the rehearing of his appeal.

As there is still a disciplinary finding against Mr Hynes, he does not have a practising certificate, which would allow him to offer accounting services to the public. Nor can he carry out audits. He can describe himself as a member of the organisation.

If he were to practise, he could potentially break Chartered Accountants Ireland’s rules, risking further disciplinary action.

Chartered Accountants Ireland did not comment on the letter or detail of the Hynes case. “It is our intention to move forward with the rehearing of the appeal at the earliest possible opportunity,” said a spokesman.

Investors in property company Tuskar Asset Management, of which Mr Hynes was a director, lost an estimated €18 million following the crash in 2008.

Following 14 days of hearings in March 2015, the regulatory board tribunal excluded him from membership of Chartered Accountants Ireland.

Among other findings, the body concluded that Mr Hynes had not been truthful in his dealings with Tuskar Asset Management, which was by then in liquidation, while several banks had judgments against him.

My Hynes changed lawyers ahead of his appeal the following year. His new solicitor sought a month’s adjournment to familiarise himself with the case.

That was refused and the appeal quashed, which the accountancy body’s rules allow. In the High Court this year, his lawyers claimed that this was a breach of fair procedures.

Chartered Accountants Ireland’s council is ultimately responsible for regulating and disciplining its members.