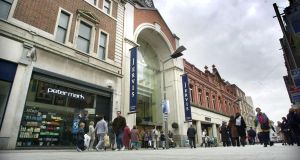 Jervis Shopping Centre in Dublin has turned up the heat on several of its high-profile tenants in pandemic-related rental disputes by issuing legal writs, as retail industry lobbyists accused some shopping centres of ignoring the plight of retailers hit by the effects of virus restrictions.

JSC has hired Dublin solicitor Ivor Fitzpatrick to represent it against the tenants, who have not yet filed defences. JSC has sought summary judgment orders, which are considered an aggressive legal tactic where the plaintiff seeks a debt order from a judge without a trial. The retailers may yet dispute the claims.

JSC is jointly owned by developer Paddy McKillen and fellow Tyrone businessman Padraig Drayne, who built Jervis together 25 years ago. They shifted control of it to the Isle of Man in 2013 in a deal designed by tax advisers.

Mr McKillen, a JSC director, referred requests for comment back to Jervis Street, where Mr Drayne is more closely involved in the management of the centre. Lorraine Fitzgerald, a Jervis manager who was been involved in recent rent discussions with tenants, confirmed it was dealing with its tenants “one by one”.

Many retailers stopped paying rent when they were forcibly closed during lockdown, between March and the beginning of June. It is understood that many retailers at Jervis have sought relief on their second-quarter rents, while third-quarter rents are also overdue for many. Many retailers have also struggled to pay their service charges while their shops were shuttered.

“We are presently in contact with all of our tenants on a one-to-one basis, with the intention of finding mutually agreeable solutions where possible.”

She declined to comment further on the legal disputes with individual tenants.

Jervis was one of several shopping centres that received letters last month from industry lobby group Retail Excellence seeking rent talks on behalf of its members.

“We need to open up the dialogue between landlords and retailers to form a meaningful resolution. Otherwise thousands of stores will pull the shutters down permanently as they can’t afford to absorb three months’ full rent without any income,” said Keelan Bourke, head of commercial at Retail Excellence.

“The burden must be shared, and many shopping centre owners need to come to the table and engage with their tenants. Many are still not responding to our members, which is causing great uncertainty to the future viability of many businesses.”