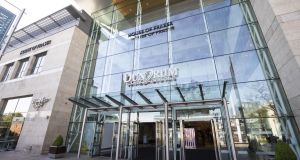 Dundrum Town Centre is owned by Hammerson, which is seeking to raise cash. Photograph: Tom Honan

Hammerson, which owns Dundrum Town Centre, is considering raising capital and selling some of its most prized assets to ride out the coronavirus crisis that is battering shopping centres and retailers.

Hammerson has collected just over 30 per cent of the rent it was due for the third quarter, according to the statement. It has about £2.4 billion (€2.73 billion) of debt, according to a company filing from February.

The developer confirmed on Monday that it was looking at a possible share sale, without saying how much it could try to raise. Sky News reported on Saturday that Hammerson was looking to raise as much as £600 million.

The shopping centre owner also said it was in advanced talks on the terms of a sale of its 50 per cent stake in VIA Outlets to its joint-venture partner, Dutch pension fund APG, according to a company statement.

The luxury outlets unit has been one of Hammerson’s best-performing businesses in recent years, luring bargain hunters from all over the world.

The company’s shares fell as much as 7.3 per cent in early morning London trading.

Mall and store owners have been hit hard by the coronavirus pandemic, as retailers were forced to close and failed to pay rent while consumers spent more online.

The fallout has already claimed Hammerson rival Intu Properties, which collapsed into administration in June after failing to agree on loan waivers with lenders.

Hammerson was seeking to cut its debt load and sell some assets even before the virus outbreak. It exchanged contracts to sell a portfolio of retail parks to private equity firm Orion Capital Managers earlier this year, but the deal subsequently collapsed.

In a bid to shore up its cash flow, Hammerson said it had received approval to issue as much as £300 million of commercial paper under the Bank of England’s Covid corporate financing facility.

The programme is intended to help the biggest companies in the UK weather the pandemic by bolstering their liquidity. – Bloomberg

1 Sean Quinn stunned at rebranding of Quinn Industrial Holdings
2 Probate is changing: What does that mean for you?
3 Dublin Aerospace takes over Flybe’s aircraft servicing base at Exeter Airport
4 Will tracker mortgage be at risk if Ulster Bank closes?
5 Makhlouf secures UK pension on top of €286,800 Central Bank role
6 Irishwoman Adrienne Gormley joins N26 as chief operating officer
7 Irish golf tourism faces ‘wipeout’ unless Covid travel restrictions eased
8 Three Ireland switches on 5G network around the country
9 Am I paying too much for my buy-to-let mortgage?
10 HSE could save €200m a year by using more off patent drugs - report
Real news has value SUBSCRIBE