Ikea’s Irish website recorded sales in the first 10 months after launch of €17.3 million 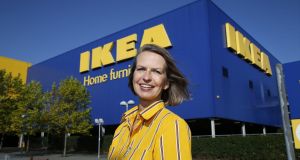 Swedish home furnishings giant Ikea is eschewing further expansion of its store network in Ireland, after a strong performance online following its entry a year ago into the ecommerce space.

Ikea has over the past 18 months been closely linked with potential development sites in Cork and Dublin, and is reported to have held discussions with various local authorities.

However, Claudia Marshall, Ikea’s market manager for Ireland, said on Wednesday that it “has no plans to open any additional stores in Ireland at the moment”, on top of its Dublin store and a smaller “order and collect” outlet.

This contrasts with what Ms Marshall said a year ago, when she suggested Ikea was on “a growth agenda in Ireland, [although] there is nothing specific I can confirm. We are in dialogue with partners about expanding in the market, and in the future we will see the next step”.

Ms Marshall on Wednesday said Ikea’s online division is now central to its Irish growth plans, as it announced Irish sales of €181.5 million for the year to the end of August, up 7.4 per cent year on year. This equates to an average €15 million a month.

The Irish website, which only opened for business in November, recorded sales in the 10-month period of €17.3 million. Currently, Ms Marshall confirmed, more than €1 in every €10 spent by Irish shoppers at Ikea is spent online. Its Irish website received 17 million hits over the course of the year.

“We want to be where the customer wants us to be,” she said. “Our growth strategy is online.” Ikea’s strategy globally has also pivoted over the last year or so towards the online sector as a source of growth.

Ikea employs 730 staff here, up by 25 over the year to the end of August. Its staff are based primarily at its Ballymun store in north Dublin, with a smaller number based at its order-and-collection outlet in Carrickmines in south Dublin.

Ikea said it now held an 8.7 per cent share of the Irish home furnishings market and it claims to be the number one website here for sales of furniture.

“Our investment in multi-channel retailing this year was in direct response to the changing needs of our customers, and ‘Shop Online’ was a big part of this journey,” said Ms Marshall.

Among various online initiatives, she said Ikea was introducing Skype sessions for customers with its kitchen design staff.

1 Coronavirus: Construction sector most significant part of new shutdown
2 Wetherspoon’s panto-villain chairman may have the last laugh
3 Volkswagen burning through €2bn in cash per week
4 British exceptionalism backfires in style as Johnson tests positive for coronavirus
5 Can husband keep savings and half the house in divorce?
6 Remote working doesn’t suit everyone, and it exposes woolly leadership
7 Rivian takes on Tesla with big batteries and subtler approach
8 UK needs to be honest about its Covid-19 strategy
9 Coronavirus: Medtronic aiming to make 500 ventilators a week
10 Mobile, broadband suppliers to be given extra radio spectrum
Real news has value SUBSCRIBE