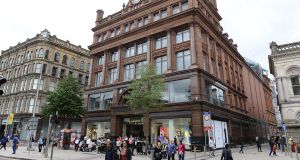 Primark in Belfast before it burned down. 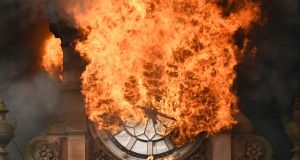 Primark in Belfast on fire.

Northern Ireland could be in line for a £25 million (€28.5 million ) cash injection next year to help revive flagging towns and cities as part of a £675 million UK government initiative to “transform local high streets”.

But retail bosses in the North are warning businesses in Belfast, which are struggling following the fire that devastated a flagship Primark store in the city, need an immediate financial lifeline if they are to survive beyond Christmas.

However, Aodhán Connolly, director of the Northern Ireland Retail Consortium, said some businesses in Belfast could fold before the fund is rolled out in the North because of the financial stresses of the fire and the significant drop in shopper footfall which the city has suffered.

Three businesses in the city have already closed following the Primark fire and 14 remain within a safety cordon erected around the building and unable to trade.

Mr Connolly says it is urgent the North’s Department of Finance passes on a multi-million package of financial support earmarked for Belfast city centre by the UK chancellor Philip Hammond.

“The £2 million from the budget must be filtered immediately to those who need it most if we are stop what could be irreversible damage to our retail and hospitality hub. Three businesses have already closed and another two are in dire straits, there is real anger and frustration among retailers and time is of the essence to ensure that businesses in Belfast get the support they need.

“December is a crucial month for retailers - it’s usually accounts for 12.5 per cent of all sales but if affected businesses in Belfast city centre cannot open soon and we cannot recover shopper footfall numbers it could mean the difference between businesses being able to stay open and further closures in to 2019,” Mr Connolly said.

It is not just retailers that are worried about the impact the cordon is having on their business in the run up to Christmas and the fact that there remains no pedestrian access to one of the city’s main thoroughfares between Royal Avenue and Donegall Place.

Belfast City Council has granted Primark planning permission to rebuild its Belfast store and has said that in the meantime a new temporary walkway is going to be in place “within weeks”.

But Colin Neill, chief executive of Hospitality Ulster which represents hundreds of businesses said: “Christmas is a critical time for the hospitality sector when around one-third of the trade takes place to sustain many of the businesses for the rest of the year.

“We need to see quicker progress on the development of the surrounding streets to restore customer confidence to encourage as many people to come out, have a good time, and support those in the hospitality trade during the forthcoming festive period.”

Primark has confirmed it will open for business in Belfast before Christmas in Commonwealth House on December 8th, which is located at the back of its former store at Bank Buildings.

It also said it intends to open a new store in Fountain House, which is located on Donegall Place in the city centre in Spring 2019.

One retail chief also believes that until the knock-on issues that stem from the Primark fire are dealt with, between 1,000 and 2,000 jobs remain potentially at risk in Belfast.

Glyn Roberts, chief executive of Retail NI, said progress has been made in dealing with the Primark fire crisis but the £2 million of Treasury funding must be transferred to Belfast City Council “asap”.

Mr Roberts said Northern Ireland retailers also need to get the same help their counterparts do when it comes to business rates.

“Northern Ireland lags hugely behind the rest of the UK when it comes to business rate relief and our members are being forced out of business because of the huge cost of rates,” he warned.

1 Lockdown exit: How can Irish economy reopen without big health risks?
2 I want to change my will quickly in case I fall ill. Do I need a lawyer?
3 Property market has not felt full impact of Covid-19, warns Sherry FitzGerald
4 Finance ministers gather as fears grow even the future of the euro zone is at risk
5 Precipitous revenue slump, Deliveroo goes convenient; and data protction fears
6 Facing economic meltdown ... and nothing wrong with our economy
7 Aldi offers priority access for front-line workers at its Irish shops
8 Cold water poured on idea of ‘helicopter money’
9 We cannot afford to neglect supply chains when supporting business
10 How to … transfer your data to a new phone
Real news has value SUBSCRIBE