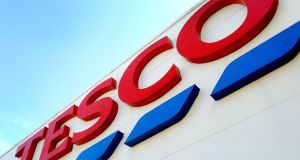 Tesco has adopted UN sustainable development goal 12.3, which calls for a reduction by half in farm-to-fork food waste over the next decade. Photograph: Nick Ansell/PA Wire

Twelve major own-label suppliers of Tesco Ireland have pledged to substantially cut food waste, as part of a scheme run by the retailer to halve its food waste by 2030 in line with United Nations targets.

The dozen companies have pledged to measure their food waste and publish the data regularly, beginning next year.

They have also committed to adopt measures to reduce wastage, as part of Tesco’s promise to implement its own 50 per cent cut. Tesco has adopted UN sustainable development goal 12.3, which calls for a reduction by half in farm-to-fork food waste over the next decade.

The local effort is part of a wider group-level food waste reduction initiative at Tesco, with participants already including major suppliers such as Kerry Group and Greencore. Tesco’s group chief executive Dave Lewis will give a talk on food waste in New York on Tuesday to coincide with the UN Climate Action Summit.

The dozen Irish suppliers who have signed up include Aryzta’s Dublin bakery, as well as the Stapleton’s bakery in Tipperary and Panelto in Longford. Fresh produce suppliers include potato grower Country Crest, the Dublin operation of Total Produce, and fruit distributor Keelings.

Denise Foley, national accounts manager at Country Crest, who is charge of the Tesco account, said its initiatives may include boosting the amount of so-called “wonky veg” that is handed over to food charities if it doesn’t meet the specific size or shape requirements of retailers.

Tesco operates a wonky veg scheme using a group called Food Cloud, which collects it from producers and passes it on to charities who distribute the fresh food to needy cases.

Ms Foley said Country Crest, which employs 150 staff at its 2,500-acre north Dublin growing facility, already uses 80 per cent recycled water and gets 50 per cent of its power from wind turbines on its land holdings.

“We are due to attend a workshop with other members of the 12 in coming weeks to discuss more ideas,” she said.

Richard Bruton, the Minister for Communications, Climate Action and Environment, said the Tesco food waste initiative would have a “significant impact” and such measures would help Ireland achieve its climate targets.

Kari Daniels, Tesco Ireland’s chief executive, promised to intensify its efforts to tackle food waste “across the supply chain – both at branded and own-brand levels”.