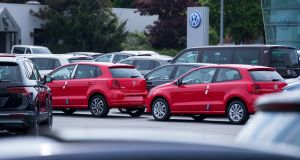 The sectors with of the economy with the largest monthly volume decreases were motor trades (-1.7 per cent), and books, newspapers and stationery (-1.2 per cent). Photographer: Krisztian Bocsi/Bloomberg

Retail sales grew at their slowest pace in three years in April amid a significant fall-off in new car sales.

The Brexit-related weakness in sterling has depressed the sale of new cars here with more consumers opting to buy cheaper used imports from the UK.

The latest figures from the Central Statistics Office (CSO) indicate the volume of retail sales rose by 1.6 per cent in the 12 months to April.

However, when volatile motor trades are excluded, the annual increase was a healthy 6.4 per cent. Similarly on a monthly basis, the volume of sales declined by 0.6 per cent in April, but rose by 0.4 per cent when car sales are excluded.

The sectors with the largest monthly volume decreases were motor trades (-1.7 per cent), books, newspapers and stationery (-1.2 per cent).

The sectors with the largest month-on-month volume increases were department stores (8.3 per cent), furniture and lighting (3.9 per cent) and bars (1.6 per cent).

The figures also show there was a decrease of 0.9 per cent in the value of retail sales in April 2017 when compared with the previous month and there was an annual decrease of 0.8 per cent, which reflects the level of price discounting that is still going on in the sector.

“Today’s retail sales data show that the robust growth in Irish consumer spending has been maintained in Q2,” Davy analyst David McNamara said, noting both employment and wages are increasing by 3 per cent and aggregate household incomes are growing by close to 5 per cent.

He said while sterling’s depreciation is now hurting UK consumers, the opposite is occurring in Ireland.

“Nearly one-third of Irish consumer goods are imported from the UK and sterling’s depreciation has contributed to a 2.8 per cent annual decline in Irish retail prices — helping households’ real incomes,” Mr McNamara said.

Sterling’s weakness has also depressed Irish retail motor trades, down 3.8 per cent on the year, he said.

He said car sales have been heavily influenced by cheaper used car imports from the UK due to weaker sterling, which grew by 56 per cent year on year in the first quarter.

“The weakness in new car sales, therefore, cannot be taken as an indication of consumer caution,” Mr O’Leary said.

“ Given the large presence of UK retailers in Ireland, the weaker sterling is contributing to lower prices for Irish consumers, the flipside of the dangers to the Irish export sector,” he added.

1 How can I view my dead brother’s will if I’m not the executor?
2 Investors pile into property as turnover in build-to-rent sector reaches €2.54bn
3 Kerry’s Chinese sales set for 30% hit from coronavirus
4 Provisional liquidator appointed to Dublin engineering firm
5 Bursting of Tesla bubble a case of ‘not if, but when’
6 Analyst doubles projection for Tesla shares to $1,200
7 Bank of Ireland staff in line for 2.95% pay increase
8 Flutter’s planned merger with Stars gets informal approval in Australia
9 US reiterates opposition to Huawei equipment being used for Irish 5G
10 Must you pay a price for ethical investment?
Real news has value SUBSCRIBE