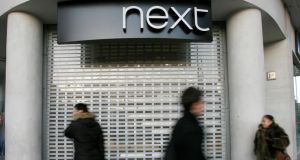 Fashion retailer Next cheered the City on Tuesday by upgrading its full-year profit expectations, admitting it had been too gloomy about the impact of the summer heatwave on its sales.

Next shares added about 7 per cent on the upgrade, which will take profits back to the level of last year, at about £727 million. A breakdown of the figures shows that more than half the group’s sales will come from its online operations this year, with the chain of shops producing less than a third of profits.

Ten years ago, its bricks-and-mortar operation accounted for 67 per cent of sales and profits.

But the most interesting part of Next’s statement to the City wasn’t about the weather, nor the continuing shift of its business online, but its detailed study of the potential impact of Brexit on its business.

A growing number of companies have outlined their views on Britain’s departure from the EU, some in very strong language. Airbus has warned it may have to pull its UK investments in the event of a no-deal Brexit, and, more recently, Jaguar Land Rover warned a disorderly departure could cost tens of thousands of jobs.

But Next is among the first companies to provide a more detailed view, in a document entitled Brexit Preparation and Impact Analysis, which it published alongside its results yesterday.

The 10-page analysis – more detailed and fact-based than some of the papers the UK government has so far managed to publish – makes for fascinating reading.

And it’s all the more interesting given that Next chief executive Simon Wolfson, is a leading supporter of Brexit, which he’s on record as saying could spark an “economic renaissance” in Britain. However, the Conservative peer has also warned that a chaotic exit from the EU could result in “years of economic decline” for Britain.

In its analysis, Next says it is preparing its business for the possibility that the UK leaves the EU without either a transition period or a free trade agreement in place. Although it believes this is “highly unlikely”, its plans to deal with such an outcome are “well advanced”, the group says.

They include setting up the administrative, legal and physical infrastructure that will be needed to operate effectively under such a scenario, and it is confident all the necessary arrangements will be in place by March next year.

Next has assessed the Brexit risks to its business in order of magnitude, and sees the biggest single problem as the delays and queues that would be suffered at UK and EU ports because of increased customs declarations.

It’s not yet clear, Next says, how well prepared the UK customs authorities are, and more information on how they plan to manage and mitigate the increased workload would be “helpful”.

Other risk factors are a fall in the value of the pound – the group said it had hedged its exposure up to January 2020 – and increased tariffs. Some 10 per cent of the group’s stock comes from the EU and Turkey and, without free trade agreements, it would face additional duties of about £20 million, although the group says this would add less than 0.5 per cent to its prices.

Next has clearly been busy crunching the numbers: in Westminster, meanwhile, the level of debate surrounding Brexit remains alarmingly vacuous. A couple of weeks ago, Brexit secretary Dominic Raab dragged the John Lewis Partnership into a petty and pointless row when he accused the department stores to Waitrose supermarkets group of using it as an excuse for poor performance.

John Lewis profits were wiped out over the first half and, as he warned of a substantial fall in full-year earnings, chairman Charlie Mayfield highlighted the uncertainty caused by Britain’s looming departure from the European Union.

“It’s rather easy for a business to blame Brexit and the politicians rather than take responsibility for their own situation,” Raab said, in comments that enraged business leaders.

For his part, Mayfield said he would not be dragged into “some sort of ding-dong with the secretary of state”, while at the same time pointing out the undeniable fact that the fall in sterling since the referendum has made imports more expensive.

More companies should follow Next’s example – forget about the soundbites and dire warnings and instead publish their own detailed preparations and plans for Brexit. At the very least it will give the nation some comfort that we’re not just relying on the bickering politicians to see us through this mess.