Who is Stephen Pound and why is he in the news? 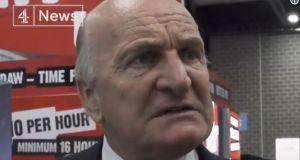 Labour MP Stephen Pound: I think there is a bit of respect owed to Ireland. Screengrab: Channel 4/Twitter

The English MP whose 80-second dissection of the Brexit impasse has become an online sensation says anyone who takes the time to visit the Northern Ireland Border will understand it.

Stephen Pound, Labour MP for Ealing North, caught the public imagination when he managed to do what so many of his colleagues in the United Kingdom cannot - articulate Brexit’s threat to the Border in the simplest terms.

Noting the issue was “life and death to the people of Ireland”, the shadow minister for Northern Ireland questioned the notion cameras could solve the problems of a 302-mile Border with 282 separate crossing points.

“Before you know where you are, you’re got uniformed UK BI /[border agency/] or customs officers on the border. If you do that then, I’m not being hysterical about this, but the peace process is finished.”

"This is life and death to the people of Ireland."

Shadow Minister for Northern Ireland Stephen Pound MP, discussing Brexit's impact on Northern Ireland and Ireland, says as soon as you've got "uniformed officers on that border", the "peace process is finished". pic.twitter.com/dcryXZvB0N

In that respect, he said, it was pointless to talk about border arrangements in Sweden and Norway.

“I’m not entirely convinced that our negotiating team are completely aware of just how absolutely visceral, how utterly serious and how incredibly important this is,” he said.

The video, hosted by Channel 4 News and attracting almost 350,000 views so far, lasts just one minute and 21 seconds.

Speaking to The Irish Times, Mr Pound said much of the problem was a general ignorance in the United Kingdom towards the Irish Border and its realities, and dismissed the “unicorn of a hard Brexit border”.

“I think there is a bit of respect owed to Ireland,” he said, explaining the Conservative Party continues to view the subject through the prism of its unionist politics.

Mr Pound - whose mother, Dominica, came from Mallow in Cork - said: “I am not Irish, but I am not English either, and I think that gives me a perspective and a bit more sensitivity than some of my colleagues.”

He said it was a “tragedy” the Conservative Party had not “immersed itself” in the subject before making statements.