Earnings at Eir rose to €154m in third quarter 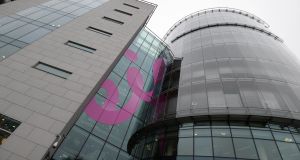 Earnings rose at telecoms group Eir in the third quarter as it further cut costs and saw a rise in customer numbers for some of its products.

The company said that earnings before interest, taxes, depreciation and amortisation rose 5 per cent to €154 million in its financial third quarter, the three months to the end of March, while costs fell by 5 per cent to €96 million.

Revenue for the period dampened marginally to €307 million, down by €3 million on the same period in 2019.

The company said that it had 954,000 broadband customers at the end of March, up 1 per cent on the prior year, while the number of mobile customers it served rose 13 per cent to more than 1.17 million. It also had 77,000 Eir TV customers in the period, down 3 per cent on the same period last year.

Growth in the company’s broadband and data services were offset by a reduction in voice and managed services revenues, “as well as by the impact of a competitive retail broadband market and regulated wholesale pricing”.

The company’s 5G network has also been expanding, with about 40 new sites going live in the past six weeks. As it stands, outdoor population coverage for 5G stands at over 28 per cent.

“Our investment programme will continue in the coming months, where it is safe to do so, with plans to roll out 5G to every major town in Ireland and continue passing more homes and businesses with superfast fibre to the home broadband,” said Eir chief executive Carolan Lennon.

On Covid-19 related working arrangements, Ms Lennon said: “Over 97 per cent of our staff have been working remotely or in the field, and we have closed all but one of our Dublin offices as well our three regional care centres. These buildings have been deep cleaned and stand ready for reopening once the lockdown conditions ease.”

Eir posted a closing cash balance of €217 million in March, up by €113 million from the second quarter, while the company has also drawn down a €50 million credit facility. The company invested €70 million in capital expenditure projects in the period.