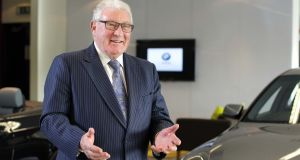 Frank Keane’s BMW and Mini dealership in Blackrock, Co Dublin has reported profits of €435,034 for 2016

Accounts filed for the landmark dealership for the year ended December 30th, show staff numbers increased at the firm from 27 to 31 over the year, with employee costs rising from €1.25 million to €1.4 million. According to the filings, the land and buildings freehold were valued independently by Lisney’s at their open market value of €5 million.

The south Dublin outlet is just one of a number of dealerships ultimately owned by Darturb Unlimited Co, which is controlled by well-known motor dealer Frank Keane.

Another of the operations in his dealer network – its Volkswagen outlet in Deansgrange, Co Dublin – has also filed accounts showing a loss of €403,893 during the eight months to December 30th, 2016. It was previously part of the MSL dealer network, sold by the O’Flaherty Group last year. The accounts show it employed 33 staff with total employee costs of €931,456.

Mr Keane was the first importer of BMWs into Ireland in 1967 and held the franchise until the German car giant took back full control of its Irish operations in 2002.

Since then Mr Keane’s business has rapidly expanded its dealer network, adding to the firm’s well-known dealership on the Naas Road in Dublin. Mr Keane also retains the Irish distribution rights for Mitsubishi Motors and Fuso Trucks.