Debenhams liquidators apologise for not notifying union of stock move 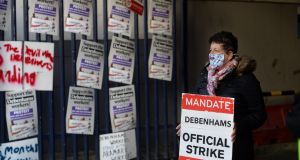 The liquidators of Debenhams’ Irish operation have apologised after not giving the agreed notice to trade union Mandate in advance of an attempt to pack or remove stock from Debenhams’ former outlet in Dublin city centre on Thursday morning.

Liquidators from accounting firm KPMG offered a commitment on Wednesday to notify Mandate “at least two hours” in advance of the times and locations at which liquidators intended to enter for either the delivery of packing materials or removal of stock.

However, representatives entered the Henry Street store early this morning without notice as picketing former Debenhams workers continued their industrial action, in which they are seeking a redundancy settlement from the defunct Irish arm of the British department store chain.

KPMG said the failure to give notice as agreed was a “logistical error”, that none of the liquidators’ team were present at the time and that the work to deliver packing materials had been booked two days ago and should have been cancelled in line with its commitment to Mandate.

“The liquidators apologise for this and assure Mandate and all of its members that there will be no recurrence.”

Mandate general secretary Gerry Light said its members were “furious, and justifiably so” by the incident, in which “a crew of men in dark clothing” had arrived at the store. He called on the Government to help resolve the dispute.

“They have the means and the ability to change legislation and allow all workers to avail of their collectively agreed redundancy packages, including the ex-Debenhams workers. A large part of the responsibility for what happened last night and what happens in the future will lie at the door of the government if they do not act now.”

On Tuesday, the joint provisional liquidators of the Irish arm of fashion retailer Debenhams – Kieran Wallace and Andrew O’Leary of KPMG – were granted a High Court injunction preventing unlawful actions and interference with their efforts to remove stock from 11 former Irish stores. KPMG then made the pledge to Mandate to give notice.

Ex-Debenhams workers have been on strike for 190 days after their company entered liquidation without paying staff their agreed redundancy package.

1 Basic income for all: Has the Covid crisis given us a new economic model?
2 Direct sea routes to Europe offer certainty in choppy Brexit waters
3 ‘I don’t need to do any of this. . .I don’t actually need to work.’
4 Admission of mistake in Oxford vaccine dose raises doubts over reliability
5 Only way is up for Stripe as valuation skyrockets
6 Promontoria barred from pursuing doctor over Ulster Bank loan
7 There was no vaccine for Anglo: Why the last crisis was different
8 Online shoppers face unwelcome tax surprise
9 Anti-alcohol zeal of public health experts peppers reopening debate
10 Fiona Reddan: Who’s afraid of Revolut? Not AIB and BOI it seems
Real news has value SUBSCRIBE