Protests at warehouses in US, France and Italy as employee tests positive for Covid-19 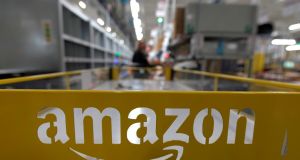 ‘Amazon cannot act like this is business as usual. If distribution centres are not safe for workers right now, they should be closed immediately.’ Photograph: Ina Fassbender/AFP via Getty Images

There have been protests at Amazon warehouses in the US, France and Italy after the retail giant tried to run normal shifts despite positive cases of Covid-19.

“Amazon cannot act like this is business as usual,” said Christy Hoffman, general secretary of UNI Global Union. “We are facing a deadly virus that has already taken the lives of thousands of people and paralysed the world’s economy. If distribution centres are not safe for workers right now, they should be closed immediately.”

In Queens, New York, a facility was cleared out on Wednesday night for deep cleaning and sanitisation, the company confirmed, after an employee tested positive for the virus – believed to be the first case involving a non-office-based Amazon worker in the country.

“We are supporting the individual, who is now in quarantine,” Amazon said afterwards. “In addition to our enhanced daily deep cleaning, we’ve temporarily closed the Queens delivery station for additional sanitation and have sent associates home with full pay.”

Video posted on social media showed employees arguing with facility managers about the danger of working in the facility.