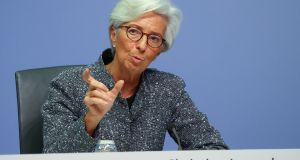 European Central Bank president Christine Lagarde: The scheme will end when the ‘crisis phase’ of the epidemic is over.

The European Central Bank has announced a massive €750 billion programme of bond buying after a late night emergency phone conference of its governing council. The move is to try to fight off pressures emerging in euro-zone government bond markets and prevent a new financial crisis taking hold.

In a tweet after the meeting, ECB president Christine Lagarde said it intended to use all its tools to defend the euro as “there are no limits” to its commitment to the single currency.“Extraordinary times require extraordinary action,” Lagarde tweeted. “There are no limits to our commitment to the euro. We are determined to use the full potential of our tools, within our mandate.”

The ECB move, its second in a week in response to the crisis, aims to hold down government bond interest rates, particularly those in countries worst affected by the crisis, notably Italy. The move led to a fall in euro zone bond yields, or interest rates, on Thursday morning, with Italian and Spanish yields falling sharply.Irish ten year bond yields, which traded at around 0.5 per cent on Wednesday, were back down under 0.25 per cent. Equity markets remain volatile and nervous.

The bond buying by the ECB should help euro-zone countries in issuing new borrowings to pay for the crisis support programmes they are launching as it should keep interest rates at very low levels.

The programme – known as the Pandemic Emergency Purchase Programme (PEPP) – will involve the ECB buying bonds issued by governments and by some companies. Purchases will continue until the end of the year, it said, representing a large commitment of cash in a short period of time. The move follows pressure on financial markets and calls on the ECB to do more to combat the crisis. In a statement the ECB said that it would increase the size, operation or duration of the programme if needed and “will not tolerate” any interruption to the smooth transmission of policy to all parts of the euro zone. It also said it would change any of its own rules if needed to fight the crisis.

Pressure on Italian government bonds, where the interest rate rose close to 3 per cent on Wednesday, has been a key focus on the markets, with investors concerned about the cost of the crisis on a slow-growing economy. There have been concerns that the ECB would not, within its rules, have scope to buy the necessary amount of Italian debt to calm investors.

Last night’s announcement indicated flexibility in interpreting rules limiting the amount of each country’s bonds it could buy in a bid to calm these concerns. The statement issued after the meeting said that the ECB was committed to playing its role in supporting all citizens and would ensure that all sectors could benefit from supportive financing conditions to help absorb the shock. “ This applies equally to families, firms, banks and governments.” – Additional reporting: Reuters