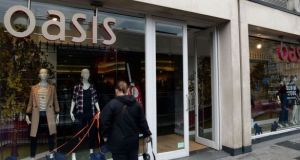 Coast, Oasis and Warehouse are all owned by Aurora Fashions, and were put up for sale in October 2016 as part of an effort to recover money for creditors of the failed Icelandic bank Kaupthing

In the same week that Forever 21 announced it is to close its only store in Ireland after racking up losses of more than €40 million since 2010, newly-filed accounts for the Irish subsidiaries of three high street brands – Coast, Oasis and Warehouse – show sales continued to decline last year.

The three brands are all owned by Aurora Fashions, and were put up for sale in October 2016 as part of an effort to recover money for creditors of the failed Icelandic bank Kaupthing.

However, the £100 million sale was abandoned late last year due to a failure to attract suitable buyers.

Coast Stores Ireland reported total sales of €7.1 million for the year to end-February 2017, new accounts show. This marks a 1 per cent decline compared with the figure recorded a year earlier.

Coast employed 110 people across its stores in Ireland, with staff-related costs rising to €1.3 million from €1.2 million a year earlier.

Oasis Fashions Ireland reported a 2 per cent fall in sales from €19.1 million to €18.8 million over the same reporting period. Gross margin rose to 59 per cent from 57 per cent to give a gross profit of €11 million, up from €10.9 million in the prior year.

Operating profit increased to €1.1 million from €200,000 as staff-related expenses for the company, which employed 231 people last year, remained unchanged at €2.7 million.

Warehouse Fashion Ireland saw its sales slump by 20 per cent last year, from €8.5 million from €6.8 million.

Gross profit margins also came under pressure, dipping to 50 per cent compared to 56 per cent a year earlier, leading to gross profit of €3.4 million, down from €4.8 million.

The company employed 97 people last year and had staff costs of €1.3 million.

1 Major credit union plans to limit savings accounts to €40,000
2 Angela Merkel sweeps in to save the euro zone
3 ‘I have a talent for justifying purchases’
4 Tesla’s Elon Musk calls for breakup of Amazon in tweet
5 Passengers face queuing in car parks at Dublin Airport
6 Penneys will not reopen on Monday despite expected changes to lockdown rules
7 In six months we will be in the grip of a 1980s-style recession
8 Italy’s cabinet approves 2020 budget that cuts taxes
9 US jobless claims ease as economy struggles to reopen
Real news has value SUBSCRIBE