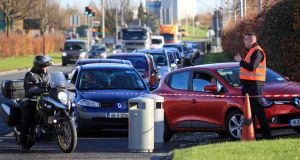 Motorists queue to fill up at a petrol station in Tallaght in Dublin which was selling fuel for 99 cent per litre for 99 minutes as part of a Black Friday promotion. Photograph: Collins

Brisk sales were reported at retail outlets throughout Ireland on Friday as shoppers took to the streets in search of ‘Black Friday’ offers.

This American tradition has become well-ensconced in the Irish psyche but the atmosphere on Dublin’s main shopping thoroughfares was considerably more sedate than the reports of gouging and scuffles over bargains which emerge from some US stores around this time of year.

Front windows on Grafton Street and Henry Street were festooned with promotional offers, with some reports of queues forming outside the larger department stores this morning.

Shops remained busy throughout the afternoon with crowds building on Friday evening as people hit the shops after work to avail of the price reductions.

“Initial indications from members is that trade has been brisk,” said Retail Ireland director Thomas Burke.

“There has been a good deal of build-up, there’s been a lot of noise around it in the media, and there is good awareness among consumers of the day.

“It won’t be made or broken today. The nature of Black Friday has changed over the last couple of years and it has become about the weekend in its entirety, and in some instances there are week-long or even fortnight-long events,” he added.

“A number of stores did engage in special early-morning activity and there were some reporting queues, but nothing excessive.

“It’s not the Irish way in comparison to the States or even in Britain where you see that hysteria that develops around Black Friday. It’s a little more orderly here,” he said.

David O’Connor, group general manager with Louis Copeland, said the Irish suit outfitter’s website experienced a notable increase in online purchases on Friday. “Today we’re looking at the busiest day we’ve ever had on the website. People are buying presents; smaller items like shirts, ties, jumpers and knitwear. We haven’t had a huge amount of growth in the stores but certainly on the web it’s taken off big time.”

Louis Copeland stores began offering Black Friday discounts to customers two years ago with a 20 per cent discount across all items in store and online this year. “This is the new build up to Christmas,” said Mr O’Connor. “In the olden days you had the 8th of December when everybody from the country came to Dublin and that was your peak whereas now Black Friday and Cyber Monday are the peak time.”

Ella De Guzman, who owns the four Siopa Ella stores dotted across Temple Bar and Wicklow Street, says the Black Friday sales are “not ideal” for smaller businesses. “Everyone expects you to compete with the big bucks but we can’t take 50 per cent off everything. For smaller businesses it’s very hard because their margins are already small enough.”

“We’re a small business on a street with all international companies. BrownThomas, a big multi-million dollar company down the street is having a sale. I saw online that Missguided , Asos and Zara are all having big sales. As a small business you have to compete because if you don’t people won’t spend their money with you.”

In Aran Sweater Market on Grafton Street a steady flow of customers are queuing up to stock up on their Irish knitwear. Paul Cashel, manager of the store, says the 20 per cent discount on all items is a response to the “panic buying” taking place across the city. “It’s just a bit of a frenzy today. Last year we didn’t know whether to do Black Friday or not so we took 10 per cent off items. We found out if we didn’t have discount people wouldn’t come in. So this year we planned for the day.

“Commercially you can see how busy it is but in my own personal view it’s just another day. But if it helps revenue and we can make money out of it fair enough.”

In-store sale offers are set to continue over the weekend while online operations will take centre stage Monday, known as ‘Cyber Monday’.

1 Aldi empire wracked by family feud
2 Four-day week is a campaign worth watching
3 Former Enron CFO Andrew Fastow: ‘You can follow all the rules and still commit fraud’
4 ‘I just thought it sounded exciting and different’
5 Volkswagen close to selling its Bugatti supercar brand
6 Ten of the most mysterious aircraft disappearances
7 Eason faces a defining chapter in its long history
8 EU signals late call on Apple tax appeal as deadline looms
9 TikTok to be banned from US app stores from Sunday
10 Social housing: Can councils afford Dublin’s sky-high prices?
Real news has value SUBSCRIBE