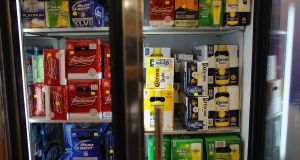 Irish consumers have bought more than seven million more pints of beer since the start of the summer than they did last year as a prolonged heatwave and the Fifa World Cup in Russia combined to see lager sales sky-rocket across Irish supermarkets.

While lager sales jumped by more than 11 per cent, bottled water increased by an even more dramatic 27 per cent as consumers looked to stay hydrated in the heat.

And it wasn’t just fluids that proved popular with Irish consumers. The latest grocery market figures from Kantar Worldpanel, covering the 12 weeks to the middle of July, show sales across the board climbing by 3.1 per cent.

“A number of things may have influenced the surge of bottled water sales in Ireland – in particular the recent weather, speculation surrounding water shortages and this month’s hosepipe ban,” said Douglas Faughnan, a consumer insight director at Kantar.

A Europe-wide shortage of CO2 may have stifled sales of carbonated water, which grew at a third of the rate of still water, with retailers and manufacturers shifting their focus to stills.

The 12-week period also saw overall sales of take-home lager climbing by 11.6 per cent – or the equivalent of an additional seven million pints – on the same period last year, as shopper numbers increased and consumers bought greater quantities than usual.

“While the hot weather will have provided a welcome boost to overall lager sales, so too will the recent World Cup in Russia,” Mr Faughnan said. “Despite Ireland’s association with stout, it is lager that is actually leading the way – 42.4 per cent of households bought lager at least once in the past 12 weeks.”

Tesco’s strong performance has continued through the first half of the summer. It was the only retailer to increase its market share this period, now accounting for 22.5 per cent of grocery sales in Ireland.

With shopper numbers continuing to fall across most retailers, in-store marketing activity plays an increasingly important role in driving spend from existing shoppers.

Tesco’s extensive “Grillin’ and Chillin’” advertising campaign saw it make a big push on key barbecue items, and products such as ice-cream, chilled poultry and burgers all performed strongly, with shoppers putting an average of 4.7 per cent more items in their baskets on each trip.

SuperValu has achieved its strongest performance since October 2016, with overall sales up 2.6 per cent to achieve a market share of 21.9 per cent.

The retailer traditionally performs well in summer categories as its store network is well catered to shoppers making more frequent top-up shops during the key barbecue season. This year has been no exception, with chilled burgers, fresh fish and lamb all recording double-digit sales growth.

Dunnes Stores now accounts for 21.2 per cent of grocery sales in Ireland, due to a sales growth of 1.9 per cent this period.

Meanwhile, German supermarkets Lidl and Aldi now account for 11.9 per cent and 11.5 per cent of the market respectively, with both posting sales growth in the most recent 12 weeks of the Kantor Worldwide survey.

Aldi was the only retailer to see a slight rise in shopper numbers this period, with the impact of its current “Swap & Save” campaign potentially contributing to increased shopper penetration.

Separately, Lidl released figures suggesting Irish consumers took full advantage of the great weather. Barbecuing has been popular as shown in the sale of 4.8 million of Lidl’s Irish beef burgers along with a staggering five million burger buns and 1.6 million bags/bowls of salad. Some 4.8 million packs of its ice-cream have been sold, 5.3 million strawberries and 295,000 litres of fresh Irish cream. Lidl customers in Ireland bought 38 million ice cubes to cool drinks during the hot weather while Lidl also sold more than 390,000 litres of its own-brand Cien suncream.