‘Things have drifted, we let them slide,’ managing director says of breach 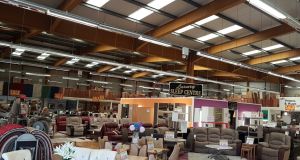 Furniture chain Bargain Town admitted things “had been let slide” at one of its six branches and it had opened to the public in contravention of nationwide lockdown measures aimed at slowing the spread of Covid-19.

More than a week ago Minister for Business Heather Humphreys confirmed that while hardware stores, garden centres and farmer’s markets could reopen from May 18th as part of the gradual lifting of restrictions, homeware shops would remain closed until June 8th.

“It is not intended that those stores that classify themselves as homeware and primarily sell items such as furniture, curtains or bedding should open,” she said.

However, on Friday a Bargain Town furniture outlet in the Royal Liver Retail Park off the Naas Road in Dublin was open for business. On Friday morning a group of adults and children discussed bed options with an assistant while other customers browsed nearby.

When the member of staff was asked why the shop was open, she said it was “supposed to be open only for collection” but admitted people were being allowed to come in to browse or buy.

Subsequently Bargain Town managing director Alan Prendergast said it was the only one of the chain’s six branches open. “We have been doing a lot of business online and we needed a depot for people to collect. But I will be honest with you: if my staff rang me and asked if they could look after customers walking around the shop, I would have said: ‘Go for it’.”

He acknowledged the shop was breaking the rules and admitted that if other retailers followed its lead then “the system wouldn’t work”. He said across the retail sector “there is broad compliance and our compliance is almost total”.

He accepted “full responsibility. It is my fault it happened and over the last week things have drifted, we let them slide, but from this minute on we won’t do it. We will only operate by appointment only. I will give that instruction.”

Greg Kelly of Des Kelly Furniture said his chain had complied with “what appeared to be a clear directive” and he was disappointed to see competitors “trading with impunity”. A Garda spokesman said it did not comment on individual cases but said the emergency legislation provided for “a graduated policing response” that had seen gardaí “engage, educate, encourage and, as a last resort, enforce.”