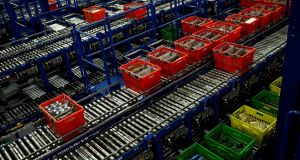 Ocado reported a 9.4 per cent drop in first-half pretax profit due to an increased depreciation charge linked to the opening of a distribution centre in Andover in England.

Ocado Group chief executive officer Tim Steiner said the UK online grocer’s chances of licensing its technology to a US counterpart have been boosted by Amazon ’s acquisition of Whole Foods.

The $13.7 billion (€12 billion) deal “is a positive move for our solutions business and we’ve seen increased interest from players in the US,” said Mr Steiner, who for years has been talking up the potential for international partnerships, though so far has only signed up an as-yet unidentified regional European retailer. Ocado is holding conversations with a number of US grocers, he said.

Amazon’s agreement to buy Whole Foods has caused sceptical US supermarket operators to rethink the potential size of the online market, according to Mr Steiner.

Only about 1 per cent to 2 per cent of the US food retail industry has moved online, a figure that may rise to 6 per cent over the next five years, Stifel Nicolaus analyst Marc Astrachan has estimated.

Mr Steiner made the comments as Ocado reported a 9.4 per cent drop in first-half pretax profit due to an increased depreciation charge linked to the opening of a distribution centre in Andover in England. The company had already given an indication of the results when it announced a £200 million bond sale last month.

The shares rose 1.2 per cent to 293.1p in morning trading in London, after initially gaining as much as 5.5 per cent. The stock trades at 128 times its projected earnings over the next 12 months, according to Bloomberg data, a valuation that “perhaps necessitates the execution of further service agreements with other international retailers sooner rather than later,” Shore Capital analyst Clive Black said .

Ocado’s so-called smart platform encompasses everything from robots that pick groceries to software that routes delivery vans. The company, based in Hatfield in England, generates minimal profit from its own retail business and securing licensing deals is crucial to justify years of investment and secure more profitable growth. – (Bloomberg)