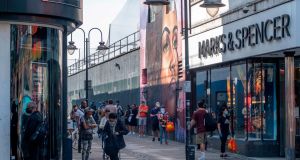 Many of M&S’s 300 or so “mainline” stores selling clothing and food are in locations where footfall has collapsed, although its standalone food stores are thought to be performing strongly

Marks and Spencer warned it was unlikely to pay a dividend for its current financial year and said the coronavirus crisis had forced it to accelerate plans to overhaul the business.

The retail group, which previously indicated it would scrap its 2019 payout, said it would save £210 million (€241 million) by withholding another year’s payout.

M&S said it was planning for clothing and homeware – which analysts at Berenberg estimate generates three-fifths of profits – to be “severely constrained” during lockdown and “materially subdued” for the rest of the year. It added that its food business had been hit in recent weeks due to the closure of cafés and a drop in travel.

The retailer announced that its lenders had agreed to “substantially relax or remove covenant conditions” on its main lending facility. “Under our base planning scenarios and even more adverse assumptions, the business would have significant undrawn credit available for the 18 months ahead,” M&S said. Most analysts believe it is unlikely to need to raise fresh equity.

However, M&S planned to speed up its turnaround plans, under what it has called a “never the same again” programme of change.

“The crisis has created a very different way of working and rapid learning for the business at all levels,” it said, adding that it was taking “very significant measures” to reduce costs and protect cash flow.

People briefed on aspects of the company’s plans said they included more emphasis on ecommerce and data, streamlined internal governance and quicker decision-making, and ensuring that the company adapted rapidly to customers’ new shopping habits once the pandemic ended.

Analysts said they expected the company to look afresh at its store portfolio, raising the prospect of more closures.

The group’s existing transformation plan was launched by chief executive Steve Rowe in 2016 and expanded in 2017 when Archie Norman became chairman. It includes plans to close more than 100 stores, many of which have been described as “uninvestable” by management owing to their location or condition.

M&S also aims to generate a third of revenues online and wants to make its food stores appeal to consumers doing large family shops as well as those buying convenience products.

Investec analyst Kate Calvert is forecasting a £1 billion drop in revenue for the current year, with adjusted pre-tax profit falling to £315 million from an estimated £430 million in 2020.

Many of M&S’s 300 or so “mainline” stores selling clothing and food are in locations where footfall has collapsed, although its standalone food stores are thought to be performing strongly.

Last week rival Waitrose warned that full-year sales could fall up to 5 per cent, despite a surge in demand during March, immediately before the UK went into lockdown.

M&S will report full-year results on May 20th.

1 Columbia Sportswear defies gloom with first Irish standalone shop
2 Why are markets booming when a crash is on the way?
3 Nine more suing INM and Leslie Buckley over alleged data hacking
4 How to further divide the economy using the wage subsidy
5 Could your old car be giving away all your secrets to its new owner?
6 ‘The rental situation stops me moving back home’
7 Home or car: what’s the best use of my savings?
8 Restaurants file court actions against insurers over lockdown losses
9 Brexit: System agreed for Irish goods to skip checks on UK trade
10 High Court appoints interim examiner to Compu b parent company
Real news has value SUBSCRIBE