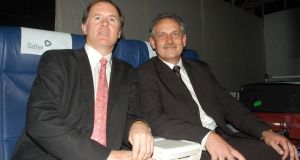 Irish aircraft lessor Aergo Capital could have more than $1 billion to spend on buying new planes next year following a recent refinancing, according to its chief executive, Fred Browne.

Aergo has just refinanced the debt on 26 craft leased to 12 clients by issuing $605 million in bonds secured on the planes themselves in a transaction known as an asset-backed securitisation.

The move gives Aergo cash against which it can leverage to borrow further funds for the purchase of new craft.

Mr Browne said that, as a result, it should have more than $1 billion to spend on this next year. “It gives us a significant amount of capital,” he pointed out.

Aergo, backed by private equity player, Carval, typically uses a mix of its own cash and debt to buy the craft it leases to airlines.

Its chief executive acknowledged that a combination of growing demand from China for aircraft and the availability of cheap money on the market, created a “very competitive environment”. However, he added that there were still good opportunities.

Mr Browne, who has a small stake in the business, said that its focus remains on narrow-body jets such as the Airbus A320s and Boeing 737s, the aviation industry’s so-called “workhorses”, used mainly for short-haul travel. The company does have a handful of A330s, larger craft used for long haul.

Aergo has a mix of airline clients in the Americas, Europe, Africa and Asia. It has leased craft to Ethiopian Airlines, South African Airways, India’s Jet Airways and Indonesia’s Lion Air