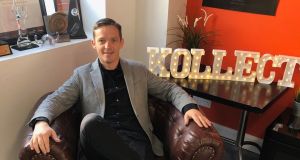 Irish start-up Kollect’s planned stock market launch next month will value the company at up to €7.4 million.

Kollect, which allows businesses and consumers to arrange waste collection online, intends to raise €2.33 million by selling 1.78 million shares at €1.33 each on Nasdaq’s First North market in Sweden.

Jamie Walsh, chief financial officer, said the move would value the Waterford-headquartered company at between €7.2 million and €7.4 million.

Kollect has the option of issuing a further 267,856 shares should investors seek more stock than the 1.78 million that the company intends offering.

This would bring the total raised close to €2.7 million. Its shares begin trading on December 19th.

Kollect will spend some of the cash expanding its recently launched British business. It already trades in the Republic.

Consumers and businesses use Kollect’s website to have bins and junk collected or hire skips. Its system connects customers with local licensed waste disposal companies prepared to take rubbish on demand.

Kollect hires the waste collector and charges the customer, receiving about 35 cent from each euro they pay, giving the balance to the waste disposal company.

It earned €2.55 million revenues in the first nine months of the year, but once-off stock-market flotation costs will leave it with a loss for that period.

“There are a lot of investors willing to support the market,” he said. “We need to scale the company really quickly.”

Mr O’Connor and fellow shareholders have pledged to hold their shares for a year after it floats.

The chief executive’s stake will be worth about €2.6 million at the flotation price. The issue of new shares will dilute his holding to 37.27 per cent from 50 per cent.

Chief information officer Robbie Skuse and chief operations officer John Hegarty will each have holdings worth €570,000 at the stock market launch price. State body Enterprise Ireland will own a stake worth about €400,000.