PTSB settles tracker mortgage case with customer out of court 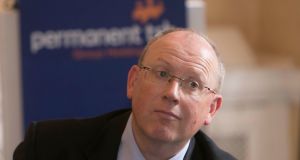 Permanent TSB chief executive Jeremy Masding. The bank has settled what is believed to be the first tracker mortgage redress case to come before the courts. Photograph: Colm Mahady/Fennells

A customer of Permanent TSB has settled a case with the bank in what is understood to be one of the first successful tracker mortgage cases taken since the scandal broke. The case is likely to result in a number of other aggrieved borrowers going down the litigation route to seek redress and compensation.

It was disclosed in the Roscommon Circuit Court before Judge Petria McDonnell on Thursday that a case taken by Maria Page against Permanent TSB had been settled.

While the specific terms were not read out in court, it is understood that the settlement is for a sum that is a multiple of what was first offered by the bank, and that costs have also been awarded to Ms Page.

The plaintiff first took the case against the bank back in August 2015 when she received a letter from PTSB acknowledging an issue with her mortgage, and offering compensation.

According to court documents, Ms Page had at all times honoured the payments set out in the mortgage agreement. She had been on a five-year fixed rate, at a rate of 5.99 per cent, but was not offered the choice of a tracker rate when this term expired. Ms Page subsequently sued the bank for breach of contract, noting that she had suffered “loss, damage, upset, distress and inconvenience”.

It’s understood that the case was settled earlier this week.

“It was a long battle to get to this point, as the liability hadn’t been accepted by the bank and she [Ms Page] was forced to litigate until the very end which was unfortunate,” said solicitor Evan O’Dwyer, of Mayo law firm O’Dwyer Solicitors, who represented Ms Page.

He now expects further cases to be brought forward.

“This is the first of many,” he said. “Everyone should be checking with their bank; everyone should make an inquiry to establish if they are affected or not.”

According to the Central Bank, more than 21,000 mortgage customers have now been impacted by the tracker mortgage scandal, in which borrowers were either put on the incorrect tracker margin, or were not offered a tracker when the terms of their contract indicated that they should have been, but the figure is expected to rise further.

Compensation to date is of the order of €160 million, but that is expected to rise significantly given that some banks, such as Bank of Ireland, have yet to commence redress proceedings.

Several solicitors around the State are understood to be working on cases for clients of the banks. Dublin lawyer Niall Kiernan has said he is hoping to bring a case to the High Court in the first half of next year.

1 Moving in and out of lockdown is a recipe for economic disaster
2 Eir customers lose sports content over contractual row with Virgin Media
3 Jervis shopping centre takes major tenants to court over rent disputes
4 Divorce: What will it cost and can you afford it?
5 Ivana Bacik opposes Bartra’s Ballsbridge shared co-living plan
6 Brown Thomas and Arnotts to cut 15% of jobs due to coronavirus crisis
7 Ireland’s economy set to shrink 8.5% due to pandemic
8 Seán FitzPatrick makes fresh bid to secure planning for new Greystones home
9 Revised help-to-buy scheme opens for applications
10 Greencore and Aryzta shares fall as European markets go into reverse
Real news has value SUBSCRIBE
Save money on international transfers