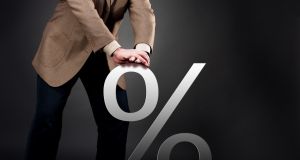 While banks in France are offering mortgage rates of less than 1 per cent, Irish rates are still stubbornly above 2 per cent, and in many cases above 3 per cent.

It might garner all the headlines, but the budget only has a limited impact on the finances of a typical household. Yes, you might gain a couple of hundred euro by avoiding higher tax bands or suffer a cut in welfare elsewhere. But overall, recent years (austerity budgets excluded) have shown the real benefits of the Minister for Finance holding aloft the budget day briefcase are generally minimal.

What can really help or hinder your finances, however, is if you have an outstanding mortgage, and there are changes to the interest rate applied to it. After all, this year, for example, mooted tax changes in the budget will put, at most, about €200 back into a household’s pocket. But switching from a 3 per cent rate to 2.5 per cent, on a mortgage of €300,000, will save €80 a month, or almost €1,000 a year.

So the news then, that a new player is entering the Irish owner-occupied mortgage market, Dilosk/ICS, at a time when Irish mortgage rates are still substantially higher than those across Europe, has to be welcomed.

It’s no surprise Dilosk has made its move into the residential market. A buy-to-let specialist up until now, it was operating in a falling market. Figures from Banking and Payments Federation Ireland (BPFI) for the first half of the year, for example, show that just 575 investment mortgages were drawn down during that period – and this was down by 11 per cent on 2018.

Better then, to try and get a slice of the owner-occupied market, with drawdowns in the first-time buyer market up by 11 per cent in the first half of the year, while mortgage approvals topped €1 billion in July, the highest level since BPFI started collecting the data in 2011.

By bringing an old name back to the market, Dilosk is also bringing some much needed competition. Yes, while banks in France are now offering mortgage rates of less than 1 per cent, Irish rates are still stubbornly above 2 per cent, and in many cases still above 3 per cent.

But will it spark a mortgage rates war as has been suggested by some?

Banks might argue that they have already gone as low as they can go. Bank of Ireland did just that earlier this year, when chief financial officer Andrew Keating said that despite historic European Central Bank lows, Irish rates were likely to start rising again this year. The reason for this is the requirement for Irish banks to hold more capital in reserve against mortgages.

However, the bank followed this in July by reversing previously-made increases to its five- and 10-year rates, and the overall trend remains downward.

In any case, the only two new arrivals on the Irish mortgage scene in recent years have been from non-bank lenders.

Dilosk is regulated by the Central Bank; but as a retail credit firm, not a bank. What this means in practice, however, is not that different to a bank. Unlike other non-bank lenders, such as the Housing Finance Agency, Dilosk will be obliged to lend to customers in line with the regulator’s mortgage-lending rules, while it must also comply with all the relevant regulatory codes applicable to mortgage lending in Ireland.

Crucially, however, while non-bank lenders typically operate in the same way as banks when lending mortgages, they aren’t subject to the same expensive capital rules. So, as the Department of Finance found earlier this year, these non-bank lenders offer the greatest hope of driving down Irish mortgage rates, because they have a valuable competitive advantage when it comes to pricing.

But just how competitive are the new players’ rates?

For first-time buyers, they’re not going to beat what’s already out there. Should you look to borrow 90 per cent with Dilosk/ICS of Finance Ireland for example, you’ll have the option of a 3.15 per cent variable rate – the same as that offered by AIB. And if you opt for 2.65 per cent fixed over three years, you’ll only be getting the same deal as KBC Bank – which also offers a €3,000 incentive – while both KBC and Ulster Bank have a market-beating rate of 2.3 per cent over two years.

But if you’re looking to buy or switch, and you have a healthy lump sum to back your move, then you’ll find that Dilosk/ICS does have the best variable rate at 2.7 per cent on LTVs of 50 per cent or less. This is less (2.75 per cent) than the existing offering from AIB, and also undercuts Finance Ireland. On a three-year fixed at this LTV, Dilosk/ICS is offering 2.55 per cent – again in line with Finance Ireland, but not quite as attractive as the 2.25 per cent/2.3 per cent offered respectively by KBC and Ulster Bank.

But competition isn’t just about breaking new ground; it can also be about creating a new “norm”. Bank of Ireland for, example, regardless of its cash-back offers, still has a shockingly high variable rate (4.7 per cent) as does Permanent TSB (4.2 per cent), irrespective of its first-year discount. When looked at in the context of some of the incumbents as well as the new players, they now look distinctly out of whack. Particularly when you consider that both Bank of Ireland and Dilosk will now both be selling their products through the broker market.

And there could be more good news to come. Last year An Post declared that it was looking for a partner enter the mortgage market with it, and look to undercut existing offerings by as much as 1 per cent. If it could achieve this, then, given the postal service operator’s already broad distribution reach, it could really frighten the incumbents into trimming their rates.

But will it really come to pass? Earlier this year it launched its tender process for such a partner, with a view to having someone appointed by April, so it could ready its assault on the Irish market in spring 2020. So far no announcement has been forthcoming, while all a spokesman would say of the potential deal is that the process was at a “crucial stage”.

In the meantime, then, a full-scale “war” might be just out of reach; but borrowers should nonetheless expect a bit of a skirmish over the coming months, as banks and non-banks alike jostle to remain competitive. And with this is an opportunity to switch and save on what is arguably the most significant of the household costs.