Should markets panic over the inverted yield curve? 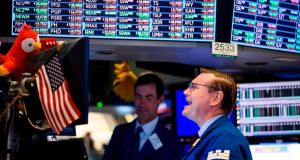 The New York Stock Exchange. Last month, major US indices suffered their biggest one-day falls of the year after 10-year bond yields fell below their two-year counterparts for the first time since 2008. Photograph: Johannes Eisele/AFP/Getty Images

Not so long ago, only finance insiders worried about yield curve inversions – an obscure-sounding piece of market jargon denoting when long-term yields are lower than short-term ones. These days, it’s headline news; even Donald Trump has tweeted about what many view as the most reliable indicator of a looming US recession. So how worried should investors be by plunging long-term bond yields?

Last month, major US indices suffered their biggest one-day falls of the year after 10-year bond yields fell below their two-year counterparts for the first time since the dark days of 2008. The trend, notes Pictet Asset Management’s Luca Paolini, isn’t confined to the US – UK yields inverted on the same day, Swiss yields had already inverted while Japan is a “whisker away”, triggering panic among investors who fear a global recession.

Yield curve inversions’ reputation as a recession indicator is well deserved. Inversions have a “strikingly accurate record for forecasting recessions”, researchers from the San Francisco Federal Reserve concluded last year, noting they have preceded each of the nine US recessions over the last 60 years. Recessions, in turn, are bad news for equity investors; since 1950, notes Luca Paolini, every bull market has started and ended with a US recovery and a US recession. The inversion of the US yield curve accordingly “strengthens the bear case for the economy and stock markets”, says Paolini, who expects “considerable volatility” (he projects the Vix, a measure of market volatility, will rise by about 30 per cent over the next two years) and meagre returns.

That said, some argue too much attention is being paid to the spread between two- and 10-year yields. Firstly, this inversion was a very brief intraday affair, whereas the research indicates little cause for concern unless inversions persist. Secondly, the man who discovered the yield curve’s predictive power, Cam Harvey of Duke University and Research Affiliates, has found the curve from three-month to 10-year bonds provides the best signal to investors. As it happens, that curve has been inverted for some months now (a serious concern, given Harvey has found that inversions lasting three months are reliable recession signals). Other parts of the yield curve have been inverted since December. August’s inversion, then, was coming; the bond market’s unease is not new.

Harvey’s findings are concerning investors, although some contend the near-term danger may be overstated. Sceptics note that while the yield curve has historically predicted US recessions, its record is less stellar in other countries. In the UK, the yield curve was inverted for long periods during the economic expansion between 1997 and 2002. In Germany, it inverted before the 1991 boom and the 2013 economic recovery, but didn’t invert prior to the 2016 slowdown. Japan has seen numerous recessions since 1991, but the yield curve hasn’t inverted over that period. “If bond markets could reliably predict recessions, they should be able to do so everywhere,” argues UBS economist Paul Donovan. A very big yield inversion would say something is wrong with the economy, he adds, but today’s inversion “is too small to reliably signal a recession”.

Is this time different?

UBS also argues US bond yields are being “weighed down” by the $16 trillion in government bonds globally with a negative yield. Others make the same point, that this time may really different. Allianz economist Mohamed El-Erian, the former head of bond giant Pimco, says the US bond market is “distorted”; rather than reflecting economic activity, it has imported the effect of negative rates in Europe. Echoing that, former Federal Reserve chair Janet Yellen says after a decade of quantitative easing that has driven bond yields to the floor, the yield curve “may be a less good” recession signal. Interest rates were above 6 per cent the last nine times the yield curve inverted, but yields at 2 per cent are “a very different situation”, says Ritholtz Wealth Management chief executive Josh Brown.

Even if this time isn’t different, investors should know yield curves are “blind in one eye”, says Capital Economics, in that “they can often see economic trouble ahead but struggle to gauge how far away it is”. The San Francisco Federal Reserve, while praising the yield curve’s predictive power, notes that the delay between inversions and the beginning of a recession has ranged from six to 24 months. On average, says Ritholtz Wealth Management’s Ben Carlson, it takes 17 months for recessions to follow inversions. Looking at the last five inversions, Carlson found stocks enjoyed average gains of 15 per cent over those periods, gaining on all but one occasion.

Similarly, a new paper by Kenneth French and Nobel economist Eugene Fama casts doubt on the yield curve’s use as a market-timing tactic. Fama and French looked at 11 major stock and bond markets to see if investors could benefit from moving out of stocks and into cash following inversions. Over the following one-, two, three- and five-year periods, they found “no evidence that yield curve inversions can help investors avoid poor stock returns”. Still, while the yield curve won’t tell you exactly when to get in and out of equities, history does suggest stocks are “on borrowed time after the yield curve inverts”, Bank of America Merrill Lynch cautioned recently.

Another factor to consider is the increased awareness of the yield curve’s potential importance. In the past, says economics professor and Bloomberg columnist Tim Duy, the Federal Reserve ignored yield curve signals because inversions happened well ahead of downturns and the Fed didn’t believe it had major significance. Consequently, they often continued hiking rates after an inversion. However, more policymakers now view an inverted curve as a warning sign. Consequently, says Duy, the Fed “is taking a very different approach in this cycle”, cutting rates well ahead of broad-based recession signals. “Once the Fed finds significance in the yield curve, then its usefulness as a recession predictor likely drops sharply,” argues Duy.

However, others, such as Cam Harvey, say the opposite may be the case. The yield curve’s newfound fame may result in it becoming a cause of economic weakness, with companies viewing an inversion as a reason to turn cautious and to cut back on spending, thus further increasing the likelihood of recession.

While yield curve concerns are growing, it’s clear no one’s sure what’s coming next. Ben Carlson points out that in January, a Wall Street Journal poll of 69 economists found that not one predicted 10-year yields would fall below 2.5 per cent by June. The average forecast was 3 per cent, almost twice as high as where yields are today. If it all seems very uncertain, that’s because things are very uncertain.