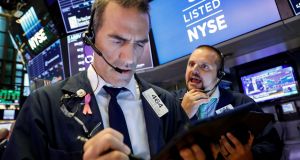 After weeks of indecision, the S&P 500 staged a breakout last week following rising optimism on the outlook for US-China trade talks.

Since plunging in early August, stocks have been in a trading range. The S&P 500 has seen 11 rallies ranging between 1 and 4 per cent, Bespoke Investment notes, and 10 declines that also ranged between 1 and 4 per cent. Stocks came within touching distance of their August lows on several occasions; they rebounded higher each time, regaining roughly half the ground lost during the market downturn, only for each rebound to fade at the same juncture – until last Thursday, when indices finally broke higher.

Investors’ indecision has been understandable. As Bespoke notes, investors have been “whipped around” by contradictory tweets, headlines, and reports. One day, upbeat economic data suggest recession talk is overstated; the next, lousy manufacturing data rekindles recession concerns. One day, it seems like US-China trade tensions are deepening; the next, conciliatory noises are made and markets rejoice.

It’s been a tug of war between bulls and bears. Last week’s breakout, if sustained, suggests bulls are gaining the upper hand.

Investors are asking if stocks have bottomed following the recent rebound. Bears can note that the Vix, Wall Street’s fear index, never exceeded 25 during August’s market downturn – nowhere near the heights one usually sees during market scares and hardly indicative of the kind of blind panic contrarians like to see at market bottoms.

However, bulls can argue that many other sentiment measures suggest investors really did freak out in August. Retail sentiment, as measured by the weekly American Association of Individual Investors (AAII) polls, has been miserable. According to Fat Pitch blogger and sentiment expert Urban Carmel, average readings over the last month have only been lower on two occasions since the bull market began in March 2009 – in February 2016 and December 2018, both of which marked market bottoms.

Other sentiment indicators mirror the AAII polls. Bank of America Merrill Lynch’s (BAML) Bull & Bear Indicator, which tracks 18 measures such as inflows, price and sentiment, recently flashed its first contrarian buy signal since January. BAML’s data shows that since 2000, global stocks have enjoyed median gains of 6.3 per cent in the first three months following the triggering of a buy signal, suggesting last week’s strength might not be fleeting.

Don’t be spooked by manufacturing recession

Talk of a US manufacturing recession spiked last week after the ISM Manufacturing index sank below 50 for the first time in over three years.

Some concern is understandable. Firstly, sub-50 readings signify contraction. Secondly, August’s unexpectedly low reading was the lowest since the mini-recession in January 2016 and marks five straight monthly declines for the index. The index has fallen nearly 10 points since the summer, showing the US-China trade war is taking its toll on manufacturing. Looking at the internals of the manufacturing report shows the last time there was such broad-based weakness was in June 2009, notes Bespoke Investment.

Commentators are debating whether a manufacturing contraction will be followed by a downturn in the broader economy. Still, history doesn’t suggest this is an unduly worrying signal, according to SentimenTrader’s Jason Goepfert. He found nine past instances where the ISM index fell below 50 for the first time in at least two years. The S&P 500 went on to average gains of 12 per cent over the following year and advanced on all but one occasion.

Obviously, this time may be different. History is a guide, not a guarantee, but Goepfert’s stats suggest investors shouldn’t be too spooked by weak manufacturing data.

Ordinary investors have long been attracted to lottery stocks – essentially, bad bets that are overvalued and very likely to underperform, but which have a small chance of delivering gargantuan returns. Researchers have argued investors are aware the odds are bad but are willing to take a punt on the off-chance they win big. However, that’s not the whole story, according to ‘Attention, Social Interaction, and Investor Attraction to Lottery Stocks’, a new paper co-authored by behavioural finance expert Prof David Hirshleifer.

Firstly, investors have limited attention and are more likely to hear about lottery stocks than their more stable counterparts. Secondly, people like to talk to others about big returns they have enjoyed. These two linked factors draw naive investors to lottery stocks. Hirshleifer finds the most blatant lottery stocks tend to be in the news for a variety of reasons, such as extremely large recent stock returns, which then prompts a spike in related Google searches. Lottery stocks are also more likely to be headquartered in locations with high social interactions, as evidenced by factors such as Facebook interactions.

To summarise: many investors buy a stock because it’s in the news and an office colleague is boasting about their gains – not a good idea.