Irish women retire on €153 a week less than men – ESRI 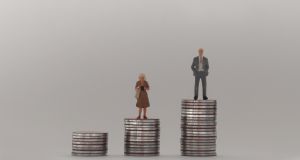 Irish women’s weekly income is €153 less than men in retirement, according to a new study from the ESRI think tank. It found that a combination of shorter careers, fewer working hours, and lower earnings for women means that Ireland has a gender pension gap of some 35 per cent.

In a new study, the Economic and Social Research Institute (ESRI) has used data from 2010 to shine a light on how women fare financially in retirement compared with men. The findings point to a significant differential, raising issues for policymakers.

According to the study, which is based on data from the Irish Longitudinal Study on Ageing (Tilda) for 2010, the average total weekly pension income that year was €280 for women and €433 for men. This means that, on average, women’s pensions in retirement were 35 per cent lower than those of men – the pension gap.

This report raises serious questions in relation to the Government’s reform of our pension system.

The study finds no evidence of a gender pension gap when it comes to the State pension. The discrepancy in income is driven by the fact that women are far less likely to have their own private pension.

While more than one in two men (55 per cent) had an occupational or private pension in 2010, just 28 per cent of Irish women did. Not only that, but even when women do have a supplementary pension, they tend to spend fewer years working, which conspires to widening the gap further.

Among the 28 per cent of women who did have a private pension in 2010, typical income form these pensions was just €82 a week compared with €233 for men – almost two-thirds more.

Adele Whelan, a co-author of the report, said that, to reduce the pension gender gap, policymakers need to consider measures to raise female employment levels, reduce the differences in occupational and private pension coverage across genders, ensure increased continuity in employment and adequately protect against care-related interruptions.

“Policies concerning the provision of increased and more affordable childcare and long-term care services can also play a role to increase female employment levels and ensure increased continuity in employment,” she said.

While the gender pay gap – the differential between what a man earns compared to a woman – has been shrinking in Ireland for some time, dipping below 14 per cent in 2014, the ESRI study shows that Ireland’s pension gap remains stubbornly high.

It is, however, on a par with the EU average, with latest figures (for 2017) indicating an average gender pension gap across the EU of 35.7 per cent. By country, it ranges from 46.1 per cent in Malta, 43.4 per cent in the Netherlands and 42.6 per cent in Luxembourg to 7.5 per cent in Denmark and just 2.6 per cent in Estonia.

“This is partly because their partners are likely to receive a qualified adult payment. It is also because more women receive lower personal rates as a result of less time spent in employment,” the study found.

Orla O’Connor, director of the National Women’s Council of Ireland said, the report “raises once again serious questions in relation to the Government’s reform of our pension system, which focuses mainly on increasing enrolment into private pensions.

“This approach does nothing to address the inherent gender differences in terms of employment history and is likely to further increase rather than reduce gender inequalities in relation to the old age pension.

“Women are more likely to be in low pay, precarious employment and move in and out of the workforce due to their care responsibilities over their life time. For these women the solution is not about focusing on their financial literacy and raising awareness about private pensions. They simply do not have the resources to invest in a private pension.”