Cantillon: Odd timing for Taoiseach to delve outside stated programme for government 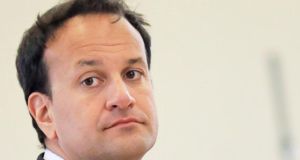 Leo Varadkar: told an online party conference that no one should pay tax on inheriting a family home of average value. Photograph: Julien Behal

Outgoing taoiseach Leo Varadkar has picked a funny time to frame a new policy of inheritance. The Fine Gael leader told an online party conference that no one should pay tax on inheriting a family home of average value and vowed to press that case in budget negotiations in any new government.

Inheritance is a touchy subject in Ireland – even among those most unlikely ever to trouble even the current tax-free thresholds.

Varadkar was expressly playing the Dublin card. According to the most recent CSO data, the average property value in Dublin in April was €438,500, rising to €598,000 in Dún Laoghaire-Rathdown – comfortably ahead of the current inheritance tax threshold of €335,000 for a child inheriting from their parent.

However, for the State as a whole, the average was just €280,000 and, if you strip out Dublin, the average is significantly lower. By Varadkar’s logic, people outside the capital would be losing €55,000 to €100,000 of their current inheritance tax-free threshold. How is that likely to fly with the electorate?

The Taoiseach’s kite-flying also conveniently ignores that his party has been in government for the past decade and has sanctioned only very modest increases in the tax-free inheritance tax threshold.

As we enter a new government term, the focus will necessarily be on restoring the fortunes of the economy after the ravages of the Covid-19 pandemic. Any spare budgetary room thereafter is already largely earmarked for climate change measures.

Inheritance is not mentioned once in the 126-page proposed programme for government that Varadkar’s team has had an active part in framing over five months. Clearly not a priority then.

Varadkar’s new vision is absent also from the party’s general election manifesto early this year – which aimed only to reduce inheritance tax from 33 per cent to 25 per cent on the first €250,000 above the tax-free threshold.

If you didn’t know better, you’d almost swear he was egging on the Green Party’s “principled” wing to vote down the proposed programme for government.