Government agenda can’t be criticised: It promises everything 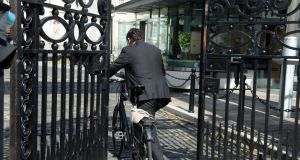 Circumspection among Green Party members most likely centres on whether or not to do a deal with the establishment. File photograph: The Irish Times

If the programme for government is not endorsed by the Greens and the proposed coalition deal collapses, it won’t be the programme’s fault.

The 139-page document promises almost everything to which a modern State can reasonably aspire. Housing for all, universal healthcare, full employment, a near complete decarbonisation of the economy to address climate change, even an adherence to better metrics to gauge our personal wellbeing. It’s impossible to criticise. That’s not to detract from the party fixers who stitched the thing together. It’s a difficult task bringing together three entities that have been mauling each other politically for years.

And these documents are only ever aspirational. People aren’t stupid. What comes next is the realpolitik. But normally, you can infer the likely direction of travel from the emphasis placed on certain areas, but it’s not obvious in this case.

Okay, there is the green agenda but even Exxon Mobil – the world’s largest listed oil company – has a coterie of green pledges in its bumpf. The programme posits the idea of creating 200,000 additional jobs by 2025, which pre-supposes the same level of job creation as the pre-Covid era while warning about living with Covid and needing a national economic plan to restore employment.

Nowadays the aim is not to offend most people rather than win them over to a cause. This is probably why establishment parties world over appear to be saying stuff that increasingly fails to resinate.

What about the catch-all parties?

What Fine Gael and Fianna Fáil stand for is a head-scrachingly difficult question. They may stand for what the electorate wants. A bit of tinkering here and there, stable stewardship, but no fundamental overhaul. Sinn Féin will argue its increased mandate reflects the electorate’s appetite for real change but it’s not obvious what the party would do differently. It hardly sets a radical agenda up North.

Circumspection among Green Party members most likely centres on whether or not to do a deal with the establishment, to inevitably tarnish its principles, and not whether to sign up to this document.