Value investing made Buffett rich, but will it work for you?

Stocktake: with value stocks in a slump, the tortoise and hare approach may lose its appeal 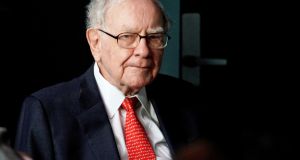 Warren Buffett: was written off in the late 1990s only to come roaring back when the technology bubble burst. Photograph: Rick Wilking/Reuters

Value investing – buying cheap, less fashionable stocks and shunning glamorous but expensive companies – is as old as the hills. Warren Buffett and many of the greatest investors in history have celebrated its merits, but this proven strategy has simply not worked over the last decade. It raises the question: is value investing dead? For years, studious investors have cautioned investors that the stratospheric valuation multiples afforded to companies such as Amazon and Netflix were unsustainable, and reiterated that, in investing, the tortoise really does beat the hare.

However, even patient investors could be forgiven for wondering if that is still the case, given the duration of the current drought. In the US, value stocks have underperformed in seven of the last 11 years. The Russell 1000 Value Index, financial magazine Barron’s noted recently, has doubled over the last decade – not bad, one might think, but it’s well shy of the overall market and nowhere close to the Russell 1000 Growth Index, which has come close to tripling over the same period. Other valuation metrics suggest the underperformance may be even more marked than that. For example, quantitative money manager Wesley Gray last year noted that a portfolio of the cheapest stocks based on price-book ratios would have earned annualised returns of just 2.44 per cent over the previous decade, compared to 7.1 per cent for the S&P 500.

In Europe, too, value strategies have badly lagged the growth approach over the last decade.

Value investors could be forgiven for saying: it’s not meant to be like this. After all, value investing “has been a part of the investment lexicon for at least the better part of a century”, as billionaire hedge fund manager Cliff Asness noted in a 2015 paper published in the Journal of Portfolio Management, and the existence of the value premium “is a well-established empirical fact”. JPMorgan data shows that, since 1927, $1 invested in a portfolio of cheap stocks would have grown to more than $3,200 over the following nine decades, compared to $515 for an expensive portfolio.

It’s not just a US phenomenon. Asness notes that the value premium is evident in 40 other countries, in more than a dozen other asset classes, and even dates all the way back to Victorian England. Of course, even the best investment strategies can underperform over lengthy periods. This was especially true of the late 1990s, when value investors like Warren Buffett and GMO money manager Jeremy Grantham were written off as yesterday’s men only to come roaring back when the technology bubble burst in 2000. Still, the current slump has proved especially testing.

Earlier this year, high-profile hedge fund value investor David Einhorn lamented that he had “never underperformed like this”. Around the same time, value investing firm Smead Capital Management noted that the current cycle of underperformance is the longest in the last 80 years.

The value premium has been shrinking for some time, which makes sense. After all, if there were only a few value investors in the world, they would have their pick of opportunities, buying bargain stocks and selling when the mispricing was corrected. If innumerable buyers are hunting for value, however, then prices are inevitably less likely to fall to dirt-cheap levels, resulting in smaller investment returns.

At the same time, a good argument can be made that, while the value premium should shrink, it should never completely disappear. Behavioural finance experts would suggest markets can never be completely efficient, given they are made up of emotional investors who remain susceptible to fear and greed, to panic and exuberance. Accordingly, high-flying glamour stocks are invariably likely to get too expensive, just as unloved stocks will become that bit too cheap. Many firms, including Goldman Sachs, which last year published a report discussing the apparent demise of value investing, argue the current slump, though long, is nevertheless temporary.

GMO, the asset management firm headed by iconic value investor Jeremy Grantham, has spent most of the last decade railing against high-equity valuations

The fundamental backdrop of the last decade has been uniquely unfavourable in some respects. Firstly, many value stocks were to be found in the financial sector, which was, unsurprisingly, the worst-performing sector over the last decade. Secondly, value investors complain that record low bond yields have meant money managers have become less discriminating and more willing to prioritise stocks that delivered the promise of growth.

As financial conditions normalise, these trends are “unlikely to persist (and are already moderating)”, as Goldman put it.

Still, value’s underperformance over such a lengthy period has prompted much soul-searching among previously committed contrarian investors.

GMO, the asset management firm headed by iconic value investor Jeremy Grantham, has spent most of the last decade railing against high-equity valuations. However, in a quarterly letter last year, Grantham confessed to having some doubts as to whether the financial world had changed.

GMO has long asserted that financial markets are inevitably characterised by mean reversion, with expensive stock markets and abnormally high profit margins eventually reverting to historically normal levels over time. However, Grantham now believes high profit margins may be here to stay due to economic and technological developments. Accordingly, high profit margins and low rates mean high valuations may persist for decades. Only time will tell if this is the case, although it’s worth noting that US equity valuations have been well above historical norms for almost all of the last 25 years, suggesting structural changes have rendered traditional valuation metrics less useful than they used to be. That’s certainly true of the price-book ratio, according to a new paper by O’Shaughnessy Asset Management’s Travis Fairchild.

Book value refers to the value of a company as entered in a firm’s books. Essentially, a company trading on a high price-book ratio is seen as expensive, whereas a low price-book ratio suggests a company may be trading for less than its true worth. However, Fairchild notes that, since 1993, the best performers tended to be companies that looked expensive by book value but cheap on other value metrics. Why? Well, Fairchild notes that intangible assets – for example, a company’s brand or its investments in research and development – are often understated on balance sheets. According to balance sheets, Netflix’s brand is worth $0; Tesla’s is worth some $60 million; Nike’s brand, the company’s “most valuable asset”, is apparently worth $139 million.

This and other factors – changes in accounting rules, the impact of buybacks and dividends, the holding on balance sheets of assets such as property at well below market value – mean this once-esteemed valuation metric is now decidedly unreliable, says Fairchild. Things change; a strategy that worked for decades may stop working, for any number of reasons. The lesson, perhaps, is not that value investing is dead, but that investment analysis is difficult, and not to be underestimated.

1 How safe is it to go back to the office?
2 Elderly parents living in property you own will save you on capital gains tax
3 More than 40% of help-to-buy recipients already had deposit
4 Construction workers among first PTSB borrowers off payment breaks
5 Most workers now expect choice to work from home part-time
6 Cinema tensions laid bare by deep crack in theatrical release windows
7 Owner of Dundrum Town Centre to sell prized assets
8 56 financial firms entered or expanded Irish operations in 2020
9 Stocktake: Is the shoeshine indicator flashing red for stocks?
10 House completions down 33% but output has rebounded
Real news has value SUBSCRIBE
Save money on international transfers