A record number of companies have issued upward earnings guidance, according to FactSet data 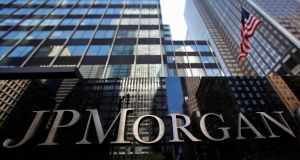 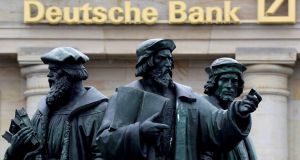 Deutsche Bank reckons profits could rise 25 per cent or higher while JP Morgan predicts that earnings will rise 21 per cent. Photograph: Kai Pfaffenbach/Reuters 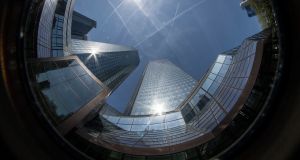 A variety of concerns – rising interest rates and inflation, trade wars, geopolitical tensions, turbulence in the technology sector – have shaken stock markets in 2018. However, with US earnings season now in full swing, investors are being reminded that there are also grounds for optimism – namely, the best outlook for corporate profits in years. Earnings, says investment strategist and market bull Ed Yardeni, are going to be “amazingly strong”.

Analysts expect that by the time the reporting period has ended, earnings will have soared 18 per cent – the fastest rate in seven years. All 11 S&P 500 sectors are likely to post profits growth, with FactSet data showing that seven are expected to post double-digit growth. Some strategists expect companies to beat already heady earnings estimates. JP Morgan, for example, predicts that earnings will rise 21 per cent, while Deutsche Bank reckons profits could rise 25 per cent or higher. Ordinarily, companies dampen down expectations in the run-up to earnings, lowering estimates in a way that allows them to “beat” analyst forecasts; hence, earnings season is often referred to a cheating season.

However, the opposite has happened in recent months. A record number of companies have issued upward earnings guidance, according to FactSet data dating back to 2006. Bank of America Merrill Lynch strategist Savita Subramanian notes consensus expectations have actually risen by more than four percentage points. Usually, forecasts fall by more than this figure in the three months leading up to earnings, so this is shaping up to be an altogether different quarter.

The obvious reason is the corporate tax cut passed by the Trump administration in December. However, it is far from being the only driver of the earnings optimism, contributing an estimated seven percentage points to the earnings growth estimates. Higher oil prices, a weaker dollar and continued economic growth mean that corporate revenues are buoyant and expected to rise by over 7 per cent.

Of course, myriad other factors have largely overshadowed the earnings picture in 2018, with the S&P 500 suffering two double-digit corrections this year. The fall in stock prices, coupled with the growth in projected earnings, mean that stocks are looking a lot cheaper than they were a few months ago.

The S&P 500 traded on 18.6 times estimated earnings at the end of January. That was the highest level seen in 16 years, reflecting the mood of unsustainable euphoria that prevailed at the time. However, stocks now trade on 16.5 times projected earnings, only slightly higher than their five-year average (16.1). This combination of falling stock prices and rapidly-rising earnings estimates is typically only seen in times of crisis. The last time it occurred was during the 2010 Greek crisis, and before that during the global financial crisis in 2008.

Similar patterns were seen during the dotcom bust in 2000; in 1998, when markets were threatened by the possibility of contagion following the collapse of the Long-Term Capital Management hedge fund; and in late 1987, after stocks suffered their biggest one-day crash in history on Black Monday. Markets have been roiled by a variety of aforementioned concerns in recent months, but few commentators believe some kind of crisis is imminent. Why then have investors shrugged off the prospect of surging earnings?

Rising bond yields have impacted the Tina trade (There Is No Alternative to stocks), says Ben Carlson of Ritholtz Wealth Management, providing “more competition for capital”. Furthermore, a strong case can be made that risks have risen in recent months and that a correction was necessary to work off the excessively bullish sentiment seen in December and January. It’s also worth noting that the relationship between earnings and stock returns is a complex one. Earnings can rise and stocks can fall, just as equity markets can post gains in years of declining earnings.

“Even if you deliver good earnings, it doesn’t mean the market will reward you,” says investment strategist and market bear Peter Boockvar. This was seen at the very start of earnings season, when indices fell despite three of America’s biggest banks – JP Morgan, Wells Fargo and Citigroup – posting earnings beats. Indeed, many would argue that one-off tax cuts and strong earnings have long been priced into stocks, given that the S&P 500 rose by a quarter in the year to the end of January. Still, bulls would suggest that the earnings picture is supportive of higher stock prices in 2018. LPL Research has pointed out that double-digit earnings growth has occurred in 12 years since 1991, with stocks rising in each of those years. Additionally, while no one is really surprised when companies invariably beat artificially lowballed estimates, it’s nevertheless the case that stocks tend to reliably rise during earnings season: since 2013, 80 per cent of the S&P 500’s gains have come during the quarterly reporting season.

Furthermore, US companies, flush with money following the tax cuts, are expected to announce a record number of share buybacks this quarter.

Goldman Sachs predicts that the combined total of share buybacks and dividends will increase by 21.6 per cent to almost $1.2 trillion this year. Goldman partly attributes the heavy market falls at the end of January to the fact that it was a blackout period, with companies temporarily prohibited from buying back shares. Goldman reported that its buyback desk enjoyed its busiest-ever week after the blackout period ended in early February, near the market bottom. Companies were “basically the only buyers” at the time, said Goldman, pointing to the importance of buybacks as a driver of market returns. Not everyone agrees with this thesis. JP Morgan calls it a “misconception”, saying that stocks tend to rise more when repurchases are announced than when the transactions actually occur. Still, the firm is nevertheless bullish about earnings season. Market falls in the run-up to earnings season were an “irrational response” to global trade tensions, it says, saying that better-than-expected earnings should steady market nerves.

That’s echoed by Deutsche Bank. Companies traditionally beat estimates by about 3.5 per cent, which means that projected profits growth of 18 per cent is likely to be closer to 22 per cent. Even that number may be an underestimate, with the bank saying that risks “are to the upside once you get into deeper and nitty-gritty issues”. Investors have been preoccupied by many issues in 2018. At the same time, there’s an old adage that bull markets climb a wall of worry. Bulls will be hoping that the increasingly bright profits picture will be the catalyst needed to ascend that wall of worry and to ease the volatility that has thus far dominated 2018.