Should investors be spooked by market turbulence? 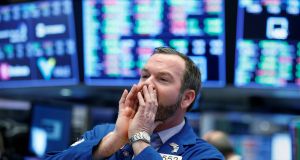 A trader passes the word on the floor of the New York Stock Exchange. Photograph: Brendan McDermid/Reuters

Stock markets peaked three months ago this week and it’s been pretty stressful ever since.

The S&P 500 has been marked by a serious escalation in volatility, enduring two double-digit percentage declines. But should investors be worried and are things likely to remain volatile in 2018? Here are six factors investors should bear in mind.

This correction has produced much excitable commentary, but there’s nothing strange about market drawdowns. Global stocks have experienced 12 corrections (double-digit declines) as well as seven bear markets (declines of at least 20 per cent) since 1980 – “an attention-grabbing downturn every two years or so”, as index fund giant Vanguard noted recently.

In fact, Vanguard added, stocks have been in corrections or bear markets for almost 30 per cent of the trading days during that period. Historically, the S&P 500 has spent 40 per cent of its time in a correction or bear market. Investors must put these frequent setbacks in perspective, says Vanguard, and to see them as the price you pay to secure superior long-term returns.

Corrections are usually short: bear markets... are not

The average number of days from the start of a correction to its bottom was 87 days, according to Vanguard. The equivalent figure for bear markets – 373 days – is more than four times longer. Similarly, it has taken stocks an average of 121 days to recover their losses during corrections. Bear markets are much more trying, stocks taking an average of 798 days to recover all their prior losses. Thus far, the current market resembles a typical market correction, with the S&P 500 having experienced a peak-to-trough decline of 12 per cent. Having already lasted three months, history suggests it’s closer to its end than its beginning.

Of course, if we’re in the early stages of a bear market, then much steeper declines are in store, and over a much longer period. If history is a guide, then investors might have to wait until 2020 or 2021 before they see new price highs.

Many reasons – rising rates and inflation, trade wars, overvaluation, regulation of technology giants like Facebook and Amazon – have been cited as contributory factors in the recent market turbulence. Stocks still look expensive even after the correction, warned Federal Reserve governor Lael Brainard earlier this month. However, recession risk remains low and that’s good news for investors – eight of the last 10 US bear markets have occurred in recessionary periods. Indeed, Citigroup’s Robert Buckland noted earlier this month that only 2.5 of the 18 factors on its global bear market checklist are currently flashing red. That’s different to the technology bubble that burst in 2000, when 17.5 out of 18 indicators were in the danger zone. Similarly, prior to the global financial crisis in 2007, 13 of 18 indicators were flashing red. “The checklist would have helped us hold our nerve in 2011-12 and told us to do the same during sharp corrections in August 2015 and early 2016,” says Buckland. “Right now, it is telling us to buy this dip.”

Nothing good about big up days

Every time markets enjoy a big one-day jump, an army of hopeful commentators declare the bottom is in and that better days lie ahead. But “big up days don’t usually occur in healthy markets”, cautions Michael Batnick of Ritholtz Wealth Management.

Since 1970, the S&P 500 has enjoyed a one-day gain of at least 2.5 per cent on 169 occasions. Of these, only five occurred when stocks were just below all-time highs. Three-quarters of these big days have occurred during stock market corrections. Like big down days, big up days reflect investor uncertainty and oscillating market sentiment. This, says Batnick, “is not indicative of what I would consider a healthy market environment”.

Could you have seen it coming?

No doubt, many investors wish they had taken profits before the recent pain. Could you have seen it coming? Well, sentiment was excessively bullish and stocks were extremely overbought at January’s market top, with Michael Batnick noting stocks were as far above their 200-day moving average as at any time since 2011.

However, no one rings a bell when the market peaks and there was nothing inevitable about the timing of the correction. Historically, says Batnick, “returns have actually been better when stocks were in ‘due for a pullback territory’ ”. Still, many investors attempt to time markets and wait for a correction before diving in. And this can work. Recent research by Elm Partners’ Victor Haghani shows that, in expensive markets, there has historically been a 56 per cent probability that stocks would fall 10 per cent below your purchase price at some stage over the next three years. In other words, more than half the time you will profit by waiting. The problem is you can also miss out on a lot of money by waiting. In the 44 per cent of cases where a correction does not happen, stocks typically went on to appreciate by about 30 per cent.

Haghani performed a number of different tests, but there was a “material cost for waiting” across all scenarios. The longer you wait for a correction to occur, the higher the average cost. Not selling prior to the recent turbulence may have cost investors money, but it was still the right decision. Haghani’s data confirms the advice famously offered by iconic investor and former Fidelity fund manager Peter Lynch: “Far more money has been lost by investors preparing for corrections, or trying to anticipate corrections . . . than has been lost in corrections themselves.”

Are we late in the cycle?

The evidence largely suggests this three-month correction is unlikely to morph into a bear market and that the declines are an “appetiser, not the main course”, as Morgan Stanley has argued. Still, it sees this nine-year bull market as an increasingly aged affair, saying cycle models suggest developed markets are in the late stages of a late-cycle environment. That means rising stock prices but also “rising inflation, tightening policy, higher commodity prices and higher volatility”. Again, history offers important clues here. Stocks are typically less volatile in the early stages of bull markets. As bull markets mature, returns become dependent on increasingly optimistic valuation multiples and economic growth assumptions. Consequently, volatility increases.

This was the case prior to the global financial crisis in 2007, when stocks began to experience increasingly precipitous drawdowns well prior to the market peak. It was also the case during the late 1990s technology bubble, with US equities enduring six separate double-digit corrections in the three years prior to the top in 2000. Last year, the S&P 500 didn’t experience a single day where it rose or fell by 2 per cent, but there were seven such occasions in the first quarter of 2018 alone. And 2018 may yet prove to be a decent year for stock markets, but investors should brace themselves for what may be a nervy ride.

1 Should I switch bank now with Ulster Bank at risk of closing?
2 Tick all the right boxes when it comes to your house insurance
3 Will brother’s widow get half of our parents’ estate when they die?
4 Belfast mailbox address used by account holder in Russian money-laundering scheme
5 Aldi empire wracked by family feud
6 Swiss drug giant Roche pays €380m for Irish biotech Inflazome
7 EU watchdog calls for end to Covid loan payment breaks
8 Diarmuid Ó Conghaile appointed State’s new aviation regulator
9 ‘I have three children and a dog, so I feel like a bit of a human ATM’
10 Finance Ireland refinances mortgages with low level of payment breaks
Real news has value SUBSCRIBE
Save money on international transfers