Markets took fright after the entrepreneur lashed out at analysts 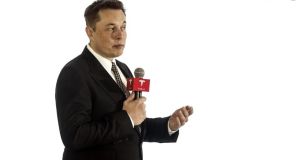 Billions of dollars were wiped off the value of Tesla stock after the company’s chief executive, Elon Musk, ignored questions from two analysts during the recent earnings conference call. Photograph: VCG/VCG via Getty Images

Tesla chief executive Elon Musk has long been lauded as a visionary, but investors in the electric car maker have endured a torrid time lately, with markets taking fright after Musk lashed out at analysts for posing “boring bonehead questions” in a recent earnings conference call. For both investors and executives, the recent commotion offers some important lessons.

Chief executives are answerable to investors

Billions of dollars were wiped off the value of Tesla stock after Musk ignored questions from two analysts during the recent earnings conference call. Some saw this as excessive Wall Street sensitivity to the actions of a free-thinking entrepreneur who plays by his own rules. However, the reality is Musk forgot he was ultimately speaking to all investors, not just analysts.

Tesla’s bonds have been in freefall this year amid mounting concern about its cash burn rate and financial stability. Analysts at Goldman Sachs, Bernstein and Jefferies have all suggested the company will have to raise money this year. When a company’s growth ambitions are potentially dependent on accessing the capital markets, it’s not a good idea to ignore “boring” questions about company specifics.

“Is he unhinged?”, asked Consumer Edge Research analyst Jamie Albertine. “And is our capital secure with Tesla?” The reaction of Musk, who last year referred to the “reality” of “great highs, terrible lows and unrelenting stress”, could be viewed as that of a pressured man feeling the heat.

It could equally be seen as someone who is excessively nonchalant towards his investors. Neither scenario will comfort analysts such as Albertine, who described Musk’s behaviour as “an incredible red flag”.

Short-sellers – traders who make money by betting on share price declines – don’t like Tesla. Roughly a quarter of Tesla stock is being shorted, making it the most shorted stock on the US market.

And Elon Musk doesn’t like short-sellers. On Twitter, he defended ignoring the aforementioned analysts on the basis they “represent short-seller thesis, not investors” (in fact, the analysts actually had “hold” or “neutral” ratings on Tesla). Tesla’s share price would soon soar higher, he predicted, resulting in the “short burn of the century”, adding: “The sheer magnitude of short carnage will be unreal.”

These were not his first criticisms. Short-sellers are “jerks who want us to die”, he said last year. “They’re constantly trying to make up false rumours and amplify any negative rumours,” he said. “It’s a really big incentive to lie and attack my integrity. It’s really awful.”

Short-sellers often attract bad press, but professional investors and academics largely agree shorts help keep share prices in line and improve market efficiency. Musk’s criticisms carry unfortunate echoes of Lehman Brothers chief executive Dick Fuld, who blamed shorts for Lehman’s declining share price in the months leading up to the company’s bankruptcy in September 2008, vowing: “I will hurt the shorts, and that is my goal.”

Short-sellers also upset Enron chief executive and convicted fraudster Jeffrey Skilling. Faced with tough questioning from a short-seller during an earnings conference call in 2001, Skilling famously responded: “Well, thank you very much. We appreciate that. . . asshole.”

These are not isolated cases. Go Down Fighting: Short-sellers vs. Firms, a 2004 study of 270 companies that publicly complained about short-selling, found that, on average, their share prices had fallen by more than 40 per cent within three years. Many companies went on to be charged with fraud.

Most chief executives are probably not keen on shorts who bet against them, but they keep quiet. They focus solely on running their companies rather than engaging in an unproductive war of words with short-sellers. Musk should heed their example.

Peter Thiel, the billionaire who co-founded Paypal with Musk, famously said you “should never bet against Elon”. Musk has started four billion-dollar companies and is, the New York Times once said, “arguably the most successful and important entrepreneur in the world”.

However, investors should note that when a well-regarded chief executive takes on well-regarded analysts, markets usually side with the analysts. According to a 2016 study, a downgrade by a star analyst increases the negative market reaction by 40 per cent, regardless of the chief executive’s reputation.

Don’t be selective with analysts

“Don’t let Musk’s conference call theatrics fool you,” warned hedge fund manager Jim Chanos in the aftermath of the chief executive’s comments. “He did not want investors to focus on his rapidly deteriorating finances.”

Musk supporters might say Chanos, who has bet against Tesla, is talking his book. Still, the negative market reaction is just the latest example of investors taking flight when a chief executive plays favourite with analysts. A 2013 study, Playing Favourites: How Firms Prevent the Revelation of Bad News, found companies that choreograph earnings conference calls by calling on bullish analysts “appear to be hiding bad news, which leaks out in the future”.

A portfolio that included bets against such companies could beat the market by up to 12 per cent a year, it found.

A separate study last year found some chief executives rely on complex language in conference calls, their intention being to waste time so there is less time to answer analyst questions. Companies that exercised more “analyst selectivity” – that is, calling on a smaller proportion of analysts – underperformed those that called on a greater number of analysts, the study found.

Musk received much criticism for saying investors concerned about volatility should “definitely not buy our stock”. However, it’s hard to fault him here, given it’s simply a statement of fact.

Tesla shares lost almost a third of their value in March, but such swings are par for the course for the company – the stock fell into bear markets (falls of at least 20 per cent) at least twice in every year between 2013 and 2017. Anyone who bought Tesla shares at the start of 2013 would have enjoyed a tenfold return on their investment but the recent volatility is a reminder that buying a high-flying growth stock isn’t nearly as difficult as holding on to it.

Short-sellers have profited from the recent weakness in Tesla shares. In March, the stock price suffered its biggest monthly loss in seven years.

However, the long battle with the company has mostly been a bruising affair for the shorts. Last year, shorts lost an estimated $2.3 billion on their Tesla positions, according to financial analytics company S3 Partners.

Short-sellers often target expensive stocks trading on seemingly unsustainable valuations. Unfortunately for them, however, some of the biggest winners in market history have been expensive glamour stocks like Tesla. Since 1963, the best-performing decile of glamour stocks in any given year has delivered gargantuan returns, outperforming the market by an average of 115 per cent over a 12-month period.

The problem, says quantitative money manager Patrick O’Shaughnessy, is that most high-fliers don’t live up to the hype, with the median glamour stock badly underperforming in an average year.

Although Tesla has delivered huge returns since its 2010 initial public offering, the challenge posed by high valuations has hobbled the company in recent years: at its April lows, the share price was below levels first surpassed in early 2014.

1 DHL boss Frank Appel: ‘We’ll be back to normal sooner than people think’
2 Big Four told to outline plans for audit split in UK by October
3 Groundhog Day policy on housing is getting us nowhere
4 Denmark’s answer to Ikea signs deal for first Dublin outlet
5 Covid-19: IDA expects 40% drop in FDI
6 Mortgages: How to get around the Central Bank’s borrowing rules
7 Deloitte only ‘Big Four’ firm to commit to retaining staff during crisis
8 Revolut ‘opens up’ to Irish banks by integrating their data in its app
9 Dublin start-up Showtime Analytics raises €2m in funding
10 Panama Papers: Links revealed to spies and Iran-Contra affair
Real news has value SUBSCRIBE
Save money on international transfers