Bubble trouble: how should investors respond? 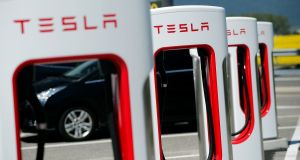 Many high-profile investors share a scepticism towards Tesla, one of the most shorted stocks on the US market. Photograph: Denis Balibouse/Reuters

Should investors be worried about bubbles? If so, how should they respond? Worrying about excessively high prices might seem misplaced at the moment, given the recent stock market correction. However, high-profile money manager Rob Arnott says some assets – cryptocurrencies, technology stocks, perhaps even the broader US stock market – remain in bubble territory.

Arnott, who helps manage $205 billion at Research Affiliates, argues in a new paper that investors need a plan on how to deal with these and other bubbles. Should you bet against them? Ignore them? Invest in their antithesis?

Arnott defines a bubble as an asset that offers little chance of any positive return relative to bonds or cash, “using any reasonable projection of expected cash flows”. Instead, high prices are sustained because speculators believe they can sell on to a “greater fool”. The obvious example today is the field of cryptocurrencies. Arnott refers to a recent survey where respondents forecast 2018 returns ranging from 95 per cent to 2,920 per cent for the top 10 cryptocurrencies. The reality has been anything but. Steep losses in recent months have resulted in many commentators warning that new price peaks are unlikely, with prices likely to continue deflating over time. As for stocks, markets constantly create “single-asset micro-bubbles” like electric car maker Tesla, occasional examples of “extreme mispricing” which require perfect outcomes to justify their lofty valuation multiples. Arnott says Tesla’s market valuation of almost $50 billion can only be justified if most cars are powered by electricity in 10 years; if most of those cars are made by Tesla; if Tesla can make sufficient margin on those cars while maintaining quality control; and if it can raise the necessary capital to cover a $3 billion annual cash drain. Together, this makes for an “unduly optimistic array of assumptions”.

Many other high-profile investors share this scepticism towards Tesla, one of the most shorted stocks on the US market. Those who have bet against the stock include hedge fund manager Jim Chanos, who says Tesla is “worthless” and a “cult stock”, as well as fellow hedge fund manager David Einhorn.

Tesla, Amazon and Netflix are part of the latter’s “bubble basket”, with Einhorn arguing for some time that the appetite for such stocks is “reminiscent of the March 2000 dotcom bubble”. More controversial, perhaps, is Arnott’s claim that the broader US market, led by the largest technology stocks, is in bubble territory. Sector and broad market bubbles are “much rarer” that “micro-bubbles” like Tesla, but the “relentless” and “dramatic” US market gains since 2009 mean valuations “now exceed all historical valuation levels”, barring the late 1990s dotcom craze. Many would argue that US stocks are highly valued rather than bubbly. Semantics aside, Arnott’s analysis suggests investors should be wary of popular stocks.

Looking at the 10 largest technology stocks in 2000, he notes that “not a single one beat the market” over the next 18 years. At the end of January 2018, the seven largest stocks in the world – Alibaba, Alphabet, Amazon, Apple, Facebook, Microsoft, and Tencent – were all technology stocks, with Arnott cautioning that no single sector has ever so dominated the global market landscape.

Historical analysis shows that, on average, just two stocks are likely to remain in the top 10 in a decade’s time. If history repeats itself, nine of the current top 10 will underperform over the next decade.

Technology valuations are “not as extreme” as 1999-2000, says Arnott, but the sector is nevertheless in another bubble.

However, the old line about markets remaining irrational longer than you can remain solvent is a reminder that you’ve also got to get the timing right. Short-sellers risk losing big money, says Arnott, even when they’re virtually assured of an eventual profit.

He points to the Zimbabwean stock market, which fell 99 per cent in US dollar terms over a three-month period in 2008. Even if you knew in advance that the market was going to collapse, vicious market swings mean you would have lost 50 times your money. An extreme case, no doubt, but other examples abound. In January 2017, tech stocks like Amazon and Netflix “really looked stretched”, sporting sky-high valuation multiples, but they continued to outperform over the following year. Instead of betting against bubbles, Arnott suggests investors simply reduce or eliminate their exposure to bubble assets. Refusing to do so in the hope that you’ll get out in time “resembles picking up nickels in front of a steamroller”, as Sir Isaac Newton discovered during the South Sea bubble in the 18th century.

Newton quickly doubled his money in the South Sea Company but the stock continued to soar after he sold it. Newton gave into temptation and bought back in shortly before it peaked, losing almost his entire life’s savings and prompting him to famously lament that he could “calculate the movement of heavenly bodies, but not the madness of men”.

Anti-bubbles are like market bubbles in that you cannot tell when the cycle will turn. Accordingly, investors require patience and prudence and should average into positions over time, says Arnott. Finally, investors can diversify into assets that are not in bubble territory. Although the S&P 500 is trading at an “extravagant premium” to historic valuations, many developed and emerging markets are cheaper than usual. Bulls try to find many ways to justify high US valuations, but the same arguments apply to European and emerging markets. If low yields in the US justify high valuations, asks Arnott, then why do zero yields in Europe lead to modest valuation multiples? Rotating out of bubbly assets and into cheaper alternatives will help insulate investors “against the next eventual-but-inevitable market downturn”, says Arnott. “Other markets offer better places to take on market risk. Seek them out”.

1 How long can Government afford to keep State pension age at 66?
2 Revenue publishes list of companies tapping State for wage support
3 Cosgrave Property Group secures exit from Nama
4 Developers may need to go back to the drawing board as one-beds fall from favour
5 Bake-off soy sauce tweet backfires for UK trade ministry
6 Halfords sees 700% increase in sales of e-scooters
7 Grocery shopping app Buymie delivering for Devan Hughes
8 Tighter regulations for car makers will drive buyers to choose electric
9 Johnny Ronan loses out on €315m Dublin docklands deal
10 Covid-19 will have a significantly worse impact on UK public finances than on ours
Real news has value SUBSCRIBE
Save money on international transfers