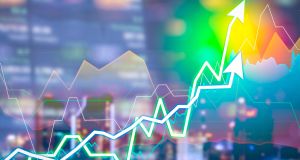 With deposit rates on the floor, an increasing number of savers are turning to investment funds for better returns.

Declining deposit rates and an increasing appetite for risk among investorssaw € 31 million a week flow into Irish Life MAPS funds over the past 12 months.

According to the life company, which launched the fund products in May 2013, Irish appetite for investing has soared, as the number of investors in its multi-asset fund range, which are available on Irish Life’s investment and pension plans, soared by 37 per cent over the last 12 months from 46,000 to over 60,000 individual investors.

Unsurprisingly then, the amount invested with Irish Life has also rocketed, with about € 31 million a week in new investments on average going into the funds, up from € 23 million a week last year.

The latest influx means that the value of Irish Life MAPS are up by €1.4 billion over the past year, with net assets in these funds of some €4 billion.

According to the company, over half of investors in the products have an investment of € 30,000 or less, while 15 per cent have investments over € 100,000. The company reported proportionate growth in male and female investors over the last five years; currently, 57 per cent of Irish Life MAPS investors are male and 43 per cent are female.

A third of Irish Life investors are under 50 years, with an overall average age of 54 years. Over half of people (56 per cent) already invested in Irish Life MAPS have an investment value of € 30,000 or less, while 15 per cent have investments over € 100,000.

Three in every four Irish Life MAPS investors are invested in MAP3 or MAP4, both medium risk funds. These have returned 23 per cent and 35.4 per cent, respectively, since March 2013.

The push towards investing among retail investors comes as Irish deposit rates continue to remain at less than 1 per cent. Nonetheless, the amount held on deposit is also continuing to grow; figures from the Central Bank for 2017 show that household deposits grew by € 2.9 billion, or 3.1 per cent, in the year.