Using the right language is key to pension plan success 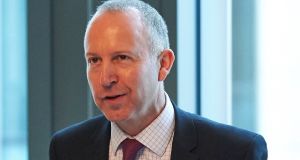 Pitching the pension message to workers will be key to the success of Government plans to introduce auto-enrolment in 2022.

That’s the view of one industry expert who argues that an appreciation of human behaviour and close attention to the importance of language will determine how well the project is received.

Ireland has struggled over recent decades to increase the number of private-sector workers putting money into pension savings. Despite myriad reports and several different initiatives – as well as generous tax relief – the proportion of the workforce investing for their retirement has generally remained stubbornly unchanged.

Nigel Aston, head of defined contribution global proposition and strategy at asset manager State Street Global Advisors, says an appreciation of human behaviour must be at the heart of pension policy and is key to the successful implementation of any scheme – voluntary or mandatory.

“Do you rely on inertia [in mandatory or auto-enrolment schemes] or do you try to engage people [to save voluntarily]?”

“We’ve been trying to educate people in the merits of pension savings here and in other countries and it hasn’t really worked,” he says.

Part of the issue for the voluntary saving approach is when you start raising the issue. “If you start talking to them in their 20s or 30s about what will happen when they are 70, it is meaningless to them; you leave it until they are in their 50s, it is getting too late,” Mr Aston says.

He says the auto-enrolment has largely been a success in the UK, where it was introduced in 2012 because it has relief on inertia. Fewer than 10 per cent of people have chosen to opt out “and when we have reinvolved them, they haven’t tended to opt out again”.

He acknowledges the UK system is now facing its first big test. As contribution rates are rising and the deductions from payrolls become more meaningful and people notice it in their pay packets, will opt-out rates increase?

Mr Aston says much of the available literature suggests that people need to be putting 14 per cent of their gross income into a pension – between their own contributions and those of their employer – assuming the current State pension system continues to deliver baseline income.

That’s still below the 25 per cent of salary that would have gone into old style defined benefit, or final salary, pensions, but it is well ahead of what most defined contribution scheme members are paying in.

Even in Australia, where the system of mandatory pensions is well established, they have struggled to break through the 10 per cent threshold, he says.

“The issue is what number do you start with and how fast do you ramp it up,” he says. “The problem we have with auto-enrolment is that people think they have ticked the box when they enrol rather than querying whether they are putting in enough.”

One way of operating, he says, is to make contribution increases coincide with pay rises so that the impact is not noticed so much in pay packets.

In terms of investment choice, State Street again returns to defaults. “People are smart and can budget for regular spending but expecting ordinary citizens to make investment decisions is a big ask,” he says. “What you need to invest in, we would argue, is a well-diversified, good value age-appropriate portfolio with a well-designed glide as you come closer to retirement.”

State Street has recently conducted research on the language around pensions and how it can affect saving.

“There are assumptions that women take less risk, they are more nervous about pensions and investments and they are less financially literate than men,” he says. “We set out to test whether this was true.”

The company analysed 1.7 million words typed into inquiry forms for the UK’s Pensions Advisory Service. It found that women did use more negative language compared with men, in describing their pension problems.

But when they then tested whether women would respond better to more negative messages – ie emphasising the dangers of not having a pension, or warning of poverty in retirement – they found that it was not the case. In fact, women and men both responded better to positive “promotion-focused” messaging that emphasises the opportunity that pensions offer.

And people who did not have a pension, in particular, responded poorly to preventive or negative messaging. “So ‘operation fear’ would certainly not work with this group.”

Given that all those surveyed responded more positively to promotion-focused messaging, care is needed to encourage people as a whole to save more for their retirement using words and phrases such as “improve your chances later in life by increasing your pension saving”, or “enhance the quality of your life in retirement by saving more”.

“Negative or prevention-focused messaging resonates with people, but in the wrong way,” the research found. “People have the tendency to bury their heads in the sand when they feel overwhelmed by the messages they are receiving.”

1 How long can Government afford to keep State pension age at 66?
2 Declan Ganley denies Donald Trump trying to swing lucrative 5G contract for Rivada
3 Brexit: UK and EU agree to intensify talks in rush for deal
4 Marquees and fleets of delivery vans: how supermarkets are ready for Lockdown 2
5 How to . . . transfer your game data to a new console
6 Help, I’ve no PRSI stamps – can I still get a pension?
7 Whistleblower warned EY of Wirecard fraud four years before collapse
8 Vendors adopting ‘wait-and-see’ approach in sub-€20m market
9 Irish start-up Wayflyer raises €7.8m in seed funding
10 Going public to take a stand against Nama ownership
Real news has value SUBSCRIBE
Save money on international transfers