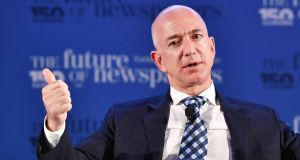 Donald Trump is usually a cheerleader for higher stock prices, but not in the case of Amazon. No fan of Jeff Bezos (the Amazon founder owns the anti-Trump Washington Post), Trump went on a tweetstorm last week, posting a number of highly critical messages that exacerbated Amazon’s recent share price woes. Amazon bulls shrugged off the falls, arguing that Trump’s company-specific tweets only ever have a temporary effect on share prices and that the president is unlikely to be able to follow through on his threats. Consequently, the share price bleeding – Amazon lost some $75 billion in market value – was an overreaction, they say. The points about Trump’s tweeting are true, although that doesn’t mean the share price decline was unmerited. Even after the declines, Amazon’s shares are still up 20 per cent in 2018 and by over 50 per cent over the last 12 months. Amazon trades on 230 times earnings – an extraordinary valuation that one sometimes sees in young growth stocks, but not in one of the biggest companies in the world. Of course, valuation doubts have persisted for years, during which time the stock has kept going higher, and the latest dip may be similarly short-lived. Still, Amazon is priced for perfection; investors are entitled to be a little bit nervous.

Stocks aren’t the only asset class to have been showing signs of strain recently. Financial market tensions have become increasingly obvious, according to Leuthold Group strategist Jim Paulsen.

His Markets Message Indicator examines five different areas: how stocks are performing relative to bonds; the performance of cyclical stocks relative to defensive stocks; corporate bonds spreads; copper-to-gold prices; and a US dollar index. When stocks were flying high in January, Paulsen’s indicator hit one of its highest levels in 40 years, indicating investor confidence and aggression akin to that seen at the major market tops in 2000 and 2007. Since then, there’s been a fear-driven flight to safety across different asset classes. The indicator is not “infallible”, says Paulsen, “but its periodic cautionary advice has been extraordinary since at least 2000”. At a minimum, investors shouldn’t limit their attention to the stock market, he says. “Rather, chatter from all financial markets should be considered and currently they are jointly whispering to ‘proceed with caution!’”

Volatility is back with a bang

The absence of volatility was the defining trait of 2017, but 2018 is proving to be a completely different ball game. Last year, the S&P 500 didn’t experience a single day where it rose or fell by at 2 per cent or more. This year, that has happened on seven different occasions, and we’re still only in April.

Last year, daily moves of 1 per cent were similarly rare, happening on only eight occasions. Since the end of January, however, the number of 1 per cent days has “rocketed higher”, notes Bespoke Investment, which points out that 38 per cent of trading days over the last three months have seen moves of 1 per cent or more. Since the current bull market began nine years ago, that percentage has only been exceeded on a handful of occasions: early 2009, early 2010, mid-2011 and early 2016. Of course, recent market stress has been particularly pronounced in the technology sector, with the Nasdaq recently moving by at least 1 per cent on nine consecutive days – the first time that’s happened since everything went belly-up in 2008.

Cracks in the market uptrend?

The S&P 500 last week closed below its 200-day moving average for the first time since June 2016. A much-watched gauge of the long-term trend, some say this portends further falls while others say it’s irrelevant. Who’s right? Stocks enjoyed a strong rebound in the days after the breach, although that doesn’t mean the short-term danger has passed. “Stocks tend to be way more volatile below the 200-day than above it,” notes Ritholtz Wealth Management’s Michael Batnick, with both the best and worst days in market history tending to occur in down-trending, stressed markets.

In fact, almost all – 83 per cent – of the worst one-day falls over the last six decades have occurred when stocks have been below their 200-day average, says Batnick. Furthermore, while stocks gain almost 1 per cent in an average month, they suffer an average monthly loss of 2.6 per cent when below their 200-day average. Looking further out, however, a brighter picture emerges. Schaeffers Research examined other occasions where the S&P 500 fell below its 200-day average after at least a year above it. The last seven times that happened, stocks were always higher six and 12 months later. In fact, average one-year returns after these signals “significantly beats typical index returns”. In other words, things are likely to remain hairy in the short term, but those with longer horizons need not panic just yet.