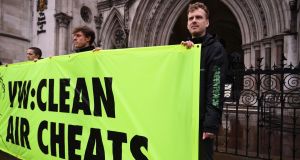 Greenpeace activists hold up a banner outside the Royal Courts of Justice in London, as Volkswagen drivers take their emissions scandal claims to the High Court. Photograph: Kirsty O’Connor/PA Wire

Consumers hit by scandals such as emissions-test cheating by carmakers would get greater powers collectively to sue companies that violate their rights, under EU plans that reflect Brussels’ frustration with corporate-rule breaking.

The European Commission will on Wednesday propose giving consumer groups the right to seek compensation on behalf of large numbers of customers, opening up legal avenues that are limited or non-existent in many EU countries.

Brussels will also seek to increase the financial penalties for companies that break EU consumer law, saying national authorities should be able to levy fines of up to 4 per cent of turnover for “widespread infringements”. Countries would be free to legislate for higher maximum penalties if they wished.

Vera Jourova, the EU’s justice commissioner, said that the plans, which need approval from national governments and the European Parliament, would be “a moment for everyone to show their cards whether we are serious in drawing the consequences from dieselgate and give a fair chance for compensation to consumers”.

Ms Jourova fought Volkswagen, the company at the centre of the dieselgate scandal, over its refusal to compensate EU customers despite doing so in the US. The episode, along with others such as Ryanair’s mass cancellations of flights in 2017, have hardened Brussels’ view that the EU lacks the legal armoury to tackle cases affecting large numbers of people in multiple countries.

Jean-Claude Juncker, commission president, last year pledged a “new deal for consumers” that would give them better protection.

“It cannot be cheap to cheat, especially in the globalised world where the big companies have a huge advantage over individual consumers,” Ms Jourova said. “We need to level these odds.”

Citizens rights’ groups have long called for greater collective redress powers, saying EU consumer law is under-enforced. Only Belgium, Italy, Portugal, Spain and Sweden have well-developed and functioning procedures, according to the BEUC, the European consumer organisation. The German government has pledged in its coalition agreement to introduce a new system.

“On paper, European consumers have rights, but getting them respected when things go wrong is too frequently mission impossible,” Monique Goyens, the BEUC’s director-general, said.

However business leaders said Brussels risked leading the EU towards a US-style class-action system that would encourage frivolous lawsuits in search of payouts. Concern has also been expressed that Brussels was overstating the problems consumers faced in upholding their rights.

“EU citizens already enjoy the most efficient and strongest consumer protection in the world,” Markus Beyrer, director-general of BusinessEurope, said.

Ms Jourova said her plans contained safeguards that would protect businesses from spurious cases - notably the fact that collective actions would only be open to consumer organisations and other non-profit groups.

“We are not following the US model, but we will make sure EU citizens can fully benefit from their rights,” she said. “It’s not about more business, but about more fairness.”

Wednesday’s package will also tackle other consumer issues, notably some companies’ use of lower-quality ingredients in food sold in central and eastern Europe, even when they were branded identically to products marketed in the west. Officials said rules would clarify that it was illegal to market different products as being identical.

Other changes are aimed specifically at the online market, including making it easier for a person to know whether they are buying from an individual or from a business, as well as giving people clearer information about the terms and conditions of social media networks and cloud storage platforms. – Copyright The Financial Times Limited 2018